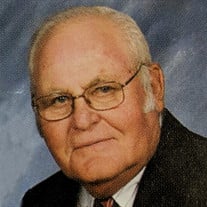 Adam Theodore Wolf, 86, passed peacefully from this life surrounded by his family on October 9, 2019. A Mass of Christian Burial will be held at 10:30 a.m., Monday, October 14, 2019 at Sacred Heart Catholic Church with burial to follow at Sacred Heart Cemetery. The Rosary and Vigil will be held at 5 p.m. on Sunday, October 13, 2019 at Sacred Heart Catholic Church. Born in Windthorst on December 18, 1932 to Adam A. Wolf and Mary (Schroeder) Wolf, Adam and his family moved to Gainesville in 1936 where Adam attended and graduated from St. Mary's School in 1950. He married Alma Louise Kubis at Saint Peter's Church in Lindsay on July 9, 1953. Adam was drafted into military service in December of 1953 and was stationed in El Paso. After discharge from the Army in 1955, they moved to Lindsay, and Adam graduated from the University of North Texas with an industrial engineering degree in 1959. He accepted a position with Sacred Heart School as a teacher and coach, and moved his family to Muenster, where he resided until his death. Ever industrious and hard-working, Adam was employed by numerous businesses around Cooke County, including Sacred Heart School where he served as principal as well as teaching and coaching, and The Center restaurant, which he and Alma purchased with Clyde Muller in 1965 and eventually bought full proprietorship. He and Alma owned and operated The Center with their seven children helping out until 1978 and was a familiar face to all who dined there. Adam also held his pilot's license and worked for many years as an industrial engineer at Weber Aircraft, from where he later retired. A devoted father, grandfather, and great-grandfather, Adam was an avid sportsman who loved watching all sports and was a fixture in the stands of many Muenster Hornet and Sacred Heart Tiger games. He spent considerable amount of time with either a fishing pole or a deer rifle in his hand and shared that love of hunting and fishing with those around him. He and Alma spent many wonderful weekends at Lake Texoma with their family and friends James and Bernice Mollenkopf and many other friends, as well as traveling extensively throughout the United States. Adam loved his ranches, aptly named Whitetail and Blacktail Ranches, where he raised cattle and hunted various wildlife with his family. Always ready to lend a helping hand, Adam was a constant volunteer. He was the first president for the Muenster Kiwanis Chapter, was a member of the Muenster Jaycees, the Knights of Columbus, and served on the Muenster Public School Board. He was a coach for ball players of all ages, from little league to adult leagues, and was active with the A.C.T.S. retreats in the Sacred Heart Parish. Adam was lovingly called G-Pa by his many grandchildren, who he spoiled and teased endlessly. He had a wide array of shirts with their college teams, and always wore the shirt with their team when he knew they were visiting. Adam is survived by wife: Alma Wolf of Muenster; daughters: Darlene and husband Alan Miller of Muenster, Margie and husband Lyle Klement of Bokchito, OK, Karen and husband Ron Dangelmayr of Muenster, and Sharen and husband Ryan Bayer of Muenster; sons: Randy and wife Stacie Wolf of Grapevine, Tim Wolf of Prosper, and Philip and wife Cindy Wolf of Leo; 25 grandchildren; 21 great grandchildren; brothers: Walter and wife Georgia Wolf of Grapevine, and John and wife Fran Wolf of Wimberly; and brother-in-law: Walter Hermes of Grapevine. He is preceded in death by parents: Adam and Mary Wolf; brothers: Ed and wife Eunice Wolf, and Lee and wife Betty Wolf; sisters: Mary and husband Paul Arendt and Joann Hermes; and daughter-in-law: Denise Wolf. In lieu of flowers, donations may be made in Adam Wolf’s memory to the Muenster Volunteer Fire Department or Sacred Heart Catholic Church.

Adam Theodore Wolf, 86, passed peacefully from this life surrounded by his family on October 9, 2019. A Mass of Christian Burial will be held at 10:30 a.m., Monday, October 14, 2019 at Sacred Heart Catholic Church with burial to follow at Sacred... View Obituary & Service Information

The family of Adam Theodore Wolf created this Life Tributes page to make it easy to share your memories.

Customized sympathy cards. Mailed for you.