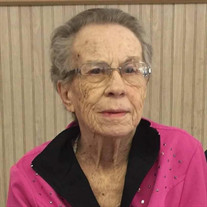 Graveside service for Aleta Ramona (Huddleston) Wolfenbarger, age 84, of Saint Jo will be held at 3:00 PM on Saturday, December 19, 2020 at Mountain Creek Cemetery in Saint Jo. Aleta was born on July 19, 1936 in Saint Jo to Buck Franklin and... View Obituary & Service Information

The family of Aleta Ramona (Huddleston) Wolfenbarger created this Life Tributes page to make it easy to share your memories.

Send flowers to the Wolfenbarger family.