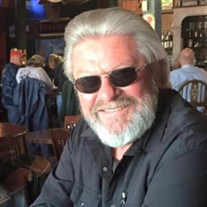 Mass of Christian Burial for Andrew 'Skeeter' Truebenbach will be held at 10:00 AM on Wednesday, March 24, 2021 at Sacred Heart Catholic Church. Burial to follow at Sacred Heart Cemetery. Rosary and Vigil will be held at 6:00 PM on Tuesday, March 23, 2021 at Scott Funeral Home in Muenster. Andrew John “Skeeter” Truebenbach of Gainesville, TX, age 69, passed away on March 21, 2021 in Denton, Texas at Presbyterian Hospital. He was born on November 18, 1951 in Muenster, Texas to Andrew and Margaret (Stoffels) Truebenbach. He was a 1970 graduate of Sacred Heart School. He worked at Bell Helicopter for over 30 years and married Pat Graham on December 31, 1997. Skeeter truly lived life to the fullest. Andy and Pat enjoyed traveling, camping at the lake and spending time with family and their sweet grandchildren. He had a special ability to make people laugh and feel welcome. He was always the life of the party! He was preceded in death by his parents, Andrew and Margaret Truebenbach, brothers, Giles, Clifford, and Allen Truebenbach and sister Jane. He is survived by his wife, Pat Truebenbach, children, Kody and Laura Truebenbach, Sabrina and Brice Gibbs, Bryan and LeighAnn Barba, Kevin Barba, and Nichole Barba as well as grandchildren, Jaxon, Kieran, Zayden, Braddock, Kelsey, Maddison, Kierstyn, Tristen, and great grandchild, Kinley. He is also survived by sisters Celine Bartel and Laura Gould.

The family of Andrew John 'Skeeter' Truebenbach created this Life Tributes page to make it easy to share your memories.

Mass of Christian Burial for Andrew &#39;Skeeter&#39; Truebenbach will...

Send flowers to the Truebenbach family.