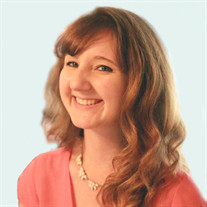 Angela Marie Wimmer, 25, formerly of Muenster, TX, died September 30, 2018 as a result of injuries sustained in a motor vehicle accident in Lakewood, CO involving a drunk driver. She was born April 15, 1993, the daughter of Randy and Linda (Krahl) Wimmer. She graduated from Seton Home Study School in 2011, and attended Christendom College in Front Royal, VA from 2011-2013. Soon after, she worked as an ophthalmic technician at North Texas Vision Center in Gainesville, TX, until she moved to Denver, CO, where she worked for Insight Vision Group. Angela was happy, beautiful, and hopeful throughout her lifetime. Her family and friends remember her as upbeat, kind, confident, and generous with her time. She was known as a great planner, organized, and a step ahead in just about everything. She was a fervent Catholic who frequented the Sacraments, and was devoted to the Holy Rosary. She loved to laugh and greatly enjoyed hiking in the Rockies and traveling, mostly to visit family and friends. One of her latest trips was to Quito, Ecuador to visit the miraculous image of Our Lady of Buen Suceso of the Purification. She is already deeply missed by her loving family, friends, and all who knew her. Angela is survived by her parents Randy and Linda Wimmer of Muenster; her brother Daniel, sister-in-law Victoria, and nephews Kolbe and Blaise of Albuquerque, NM; sister Stacie and brother-in-law Jacob Hiserman of Tuscaloosa, AL; sister Maria of Muenster; grandmother Margie Krahl of Muenster; and many aunts, uncles, and cousins. She is predeceased by her paternal grandparents Charles and Isabelle Wimmer; maternal grandfather Edward Krahl; and uncle Billy Krahl. A Rosary Service was held on Friday, October 5, at 7:00 p.m., at Scott Funeral Chapel, Muenster, led by Fr. Raymond McDaniel. A Requiem Mass, a Traditional Latin Mass of Christian Burial, was celebrated in memory of Angela on Saturday, October 6, at 11:00 a.m., at St. Peter’s Catholic Church, Lindsay, with Fr. Peter Bauknecht of Irving, TX presiding. Burial followed in St. Peter’s Cemetery. Serving as pallbearers for the service were Brandon Johnson, Christopher Jordan, Joshua Jordan, Jonathon Krahl, Joseph McCoy, and Charlie Schilling.

Angela Marie Wimmer, 25, formerly of Muenster, TX, died September 30, 2018 as a result of injuries sustained in a motor vehicle accident in Lakewood, CO involving a drunk driver. She was born April 15, 1993, the daughter of Randy and Linda (Krahl)... View Obituary & Service Information

The family of Angela Marie Wimmer created this Life Tributes page to make it easy to share your memories.

Send flowers to the Wimmer family.