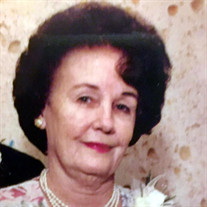 Angeline “Angie” (Knabe) Lutkenhaus, age 96, of Muenster passed away on Friday, April 24, 2020 in Gainesville, Tx. A private service was held on Monday, April 27, 2020 at 11:00 AM with Rev. Joseph Keating officiating. The service was under the direction of Scott Funeral Home in Muenster. Angie was a twin to the late Adeline (Knabe) Devers and was born on September 20, 1923 to the late Albert and Anna (Stoffels) Knabe. She was one of 11 children all born at the home in Muenster. She was raised on a farm northwest of muenster where she worked hard in helping care for her younger siblings as normal chores while attending to her normal chores of milking cows, chopping and picking cotton, and topping corn for feed. Angie attended Sacred Heart School and later worked at Camp Howze in 1943 during the war. There, she met and married Roy Schumacher. Together they had two daughters: Diane and Ruby. When Angie and Roy’s marriage ended, she attended beauty school in Wichita Falls, TX. And received her degree in October 1946. Angie first worked in Hereford, Tx. until moving back to Muenster. She worked in Mrs. Tony Gremminger’s Beauty Shop until September 13, 1954 when she worked in Mabel Colliers Coaksey’s Beauty Shop in Saint Jo, Tx. She later brought her salon business back to her hometown and opened Angie’s Beauty Shop in a rented building from John Fisher. Angie married Arthur B. “Bobby” Lutkenhaus in 1958. Angie and Bobby had six children together and eight children in all. Angie and Bobby lived the early part of their marriage on the Lutkenhaus family farm until moving to town where they purchased a home on Main Street in Muenster, moving her beauty salon to that locations as well as in a garage which Bobby had remodeled. Angie worked hard caring for and raising their children while she worked long hours in the salon 5 ½ days a week until her late seventies to early eighties due to health and age to work part time. Angie worked approximately 73 years as a hairdresser before retiring due to her declining health. Angie will always be remembered for her compassionate spirit and for giving heart to all who were blessed to have known her. Those who knew Angie were truly blessed by her humbleness, giving heart, and radiant smile. She would help anyone even if it meant doing without herself. She was an amazing woman who loved her family. Over the years, Angie cooked many Sunday dinners and Holiday meals for her children, grandchildren, and their friends to gather together for dinner and fellowship. Angie was an amazing cook and wonderful seamstress who made many quilts as gifts for her children and grandchildren every Christmas that were made with unique designs and stitched with love. Angie loved her family and always had something she baked, ice cream, and many other snacks for her children and later her grandchildren who would often walk over to her house after school. They all hold those times with their mother and grandmother as special memories in their hearts that will be forever treasure. As Angie’s health began to decline, she moved in with her daughter Janel for a few years until she later moved to River Valley, staying there until her passing. Angie is survived by son: Robert “Bobby” and wife Linda Lutkenhaus, Jan and wife Clara Lutkenhaus, Troy and Tina Lutkenhaus, Donny Lutkenhaus, and Duane Lutkenhaus all of Muenster; daughter: Janel Harding of Aubrey, Tx.; sister: Sister Anselma Knabe of Fort Worth, TX.; 30 grandchildren; 29 great grandchildren; 12 great great grandchildren; sons-in-law: Robert “Bob” peek of Duncan, Sc. and Lee Russell of Oklahoma City, Ok.; and brother-in-law: Frank Cardwell. Angie is preceded in death by parents: Albert and Anna Knabe; husband: Arthur “Bobby” Lutkenhaus; daughters: Diane Peek and Ruby Wimmer Russell; grandchildren: Melissa Koelzer, Shawna Wimmer, Tina Marshall, and Dakota Lutkenhaus; great grandson: Clint Sicking; brothers: Albert, Gilbert, Adolph, Leonard, and Arnold Knabe; and sisters: Lorin Morrison, Adeline Devers, Lillian Cardwell, and Margaret Schmitt. Due to the COVID-19 restrictions, Angie’s beautiful life will be celebrated at a memorial service at a later date. The family wishes to thank everyone for your prayers and care during Angie’s passing. Memorials in Angie’s name can be made to the American Cancer Society in honor of her daughters and granddaughters.

The family of Angeline "Angie" (Knabe) Lutkenhaus created this Life Tributes page to make it easy to share your memories.