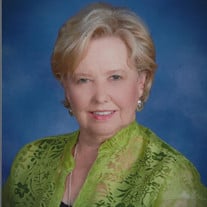 Mass of Christian Burial for Annette Margaret (Knauf) Walterscheid was held at 10:00 AM on January 22, 2021 at Sacred Heart Catholic Church, with a Rosary and Vigil at 6:00 PM on January 21, 2021 at Sacred Heart Catholic Church. She passed away on January 18, 2021. Annette was born on January 26, 1945, the second of five children, to Joe and Marie (Pels) Knauf. She attended Sacred Heart Catholic School and met her future husband, the late Theodore “Sonny” Walterscheid at Easter Sunday Mass. They were married in 1961 and remained so until his passing in 1996. A lifetime of work included the dairy she and Sonny managed until 1973, National Supply, many years in the office at Felderhoff Drilling, and more than twenty years with Prosperity Bank where she served as the Branch Manager of the Muenster location from 2002 to 2018. She very much enjoyed her many customers over the years and genuinely loved working with them. Annette was incredibly fond of her family, and took great pride in her children, twelve grandchildren and five great-grandchildren. She was always known as “Gram” even to those outside of her family. She was an ardent supporter of Sacred Heart Catholic School, and proudly recounted the story of her grandfather bringing his horse team to town to help dig the elementary building basement between 1915 and 1918. Annette was an accomplished seamstress and an avid gardener. She spent most summer evenings tending to her beautiful flowerbeds and yard. Annette is survived by daughter, Reneta Knabe, son Anthony (T.J) Walterscheid, and daughter and son-in-law, Lydia and Drew Springer. She is also survived by grandchildren Jennifer Hoedebeck Smith (Matt), Chris Hoedebeck (Alli), Sydney Hoedebeck, Jessica Knabe, Clay Knabe, Kyle Knabe, Jason Knabe, David Walterscheid (Kelly), Ben (Taylor) Walterscheid, Austin Springer (Abbey), Grant Springer, and Kate Springer. She adored her great-grandchildren: Gabriel and Ansley Smith, Luna Hoedebeck, Henry Walterscheid and Sutton Springer. She is further survived by her siblings Eunice Wimmer, Eileen (Jr.) Schilling, Leon Knauf, and Milton Knauf. She is preceded in death by her husband, Theo “Sonny” Walterscheid, her beloved daughter, Shellie Hoedebeck, her parents Joe and Marie Knauf, and her close long-time friend, Mac McCoy. We know her earthly burdens have now been lifted, her pain and trials are gone, and she lives in the heavenly light of Our Lord Jesus Christ. In lieu of flowers, we invite you to make a donation to Sacred Heart Catholic School or Trust Fund, PO Box 97, Muenster, 76252.

The family of Annette Margaret (Knauf) Walterscheid created this Life Tributes page to make it easy to share your memories.