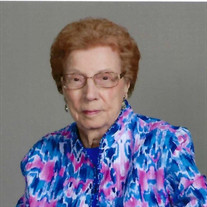 Mass of Christian Burial for Armella (Yosten) Cler will be held at 10:00 AM, Monday, June 28, 2021 at Sacred Heart Catholic Church. Rosary and vigil will be held at 6:00 PM, Sunday, June 27, 2021 at Scott Funeral Home in Muenster. Services will be officiated by Fr. Joe Keating and Deacon Gary Endres. Pallbearers are: James Dennison, Parker Forshee, Nathan Huchton, Kevin Henley, Jacob Cler, Hayden Otto, and honorary pallbearer, Devin Mangun. Burial will follow in Sacred Heart Cemetery. Armella (Yosten) Cler, 99, of Muenster was called to her eternal home with Jesus on Friday, June 25, 2021. Armella was born on March 28, 1922 in Muenster, TX to Nick and Rosa (Hesse) Yosten, the 2nd of 8 children. She spent her entire life living in Muenster except for a short time when she lived in Fort Worth serving her country as a Rosie the Riveter at Convair Aircraft. She married the love of her life, Werner Cler on April 25th, 1944. Werner passed away June 14, 1984. The Lord blessed them with 5 sons and 2 daughters. Being from the greatest generation, they worked hard to provide a good home for their family. After Werner’s death, she enjoyed traveling with friends and volunteering for several organizations. In her later years she enjoyed spending time going to SNAP (which she was planning to return to this week to play a game of 84) and being with family. Armella lived her faith, praying the rosary daily and when she could no longer attend Mass, watched it on TV, but still insisted that her church offering be put in the collection basket by one of her children. Armella is survived by all of her children, daughters Marcia Dennison of Lindsay, Brenda (Bob) Thompson of Copperas Cove, and sons Wayne (Debbie) Cler of Valley View, Glenn (Glenda) Cler of Muenster, Charles (Alyce) Cler of Lindsay, Tim Cler of Muenster and Kevin Cler of Muenster, 13 Grandchildren and 26 Great-Grandchildren. She is also survived by sister Pauline (Polly) Spires and brother Gilbert (Nick) and wife Marion, sisters-in-law Francis Yosten and Magdalen Yosten. Armella is preceded in death by parents Nick and Rosa, mother and father-in-law Charles and Elizabeth (Kleiss) Cler, son-in-law James Dennison,Jr., brothers Werner, Tony, Herbie, Meinard, and infant sister Agnes, sisters-in-law Gertrude, Margaret, and Aileen Cler, and Lucille Dye, brothers-in-law Al, Ray, Ed, and infant Joseph Cler and Albert Spires. In lieu of flowers, memorials can be made to either ABBA or Sacred Heart Catholic School Memorial Fund

Mass of Christian Burial for Armella (Yosten) Cler will be held at 10:00 AM, Monday, June 28, 2021 at Sacred Heart Catholic Church. Rosary and vigil will be held at 6:00 PM, Sunday, June 27, 2021 at Scott Funeral Home in Muenster. Services... View Obituary & Service Information

The family of Armella Marie Cler created this Life Tributes page to make it easy to share your memories.

Mass of Christian Burial for Armella (Yosten) Cler will be held...

Send flowers to the Cler family.