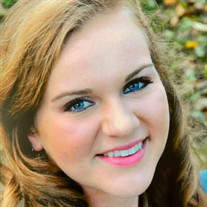 Bailey Renée Walterscheid, 24, of Muenster, Texas, passed away suddenly on November 11, 2020. She was the namesake of Bailey Inglish, an early Texas settler, and was raised on land south of Muenster that has been in the Inglish family for generations. Her parents, her brother Tyler, her grandparents, her aunts and uncles, her cousins, her many friends, and all her extended family are devastated by the loss, though they know she has been received into the arms of God with as much love, gentleness, and tenderness as when she was received into the arms of her mother at birth. Bailey Walterscheid was born on May 28, 1996, to Wade and Rhonda Walterscheid. Her grandparents are Julian and Carrie Walterscheid and George and Fran Jones. She was a member of the Children of the American Revolution and, later, the Daughters of the American Revolution. She attended Sacred Heart Catholic School in Muenster, Texas, where she sang in the choir and participated in basketball, track, and cheerleading. She received the Girl Scout Gold Award and was Homecoming Queen, Miss Sacred Heart, and salutatorian of her high school class. After graduating from Sacred Heart in 2014, Bailey attended Hardin-Simmons University, where she majored in biology with a minor in biochemistry. While at Hardin-Simmons, she served as a laboratory assistant, a tutor in chemistry, zoology, and mathematics, and as a resident assistant in her dormitory. She volunteered for Meals on Wheels, Habitat for Humanity, the Texas Mission of Mercy, and other charitable organizations. She served as an officer in multiple social clubs, including president of her honors fraternity. She participated in the University of Nebraska Medical Center’s summer dental program and for two summers worked as a dental assistant for Smiles by German Design. After graduating cum laude from Hardin-Simmons University, Bailey enrolled in the dental program at Tufts University in Boston, Massachusetts, where she was a member of multiple organizations and the president of the student chapter of the Christian Medical and Dental Association. Bailey was an outgoing person, able to relate to her young cousins, her grandparents, and even complete strangers. She was always ready to throw herself whole-heartedly into anything and to invest herself in others. She loved to travel anywhere: Honduras on a mission trip, Costa Rica to observe leafcutter ants, Salzburg during the Christmas season, Quebec City to visit a friend, the Grand Canyon and the Four Corners — wherever she could catch a ride. She was able to crochet any image she saw, and her work has blessed many of her friends. She was a ray of sunshine who brightened the lives of all around her. The rosary vigil and the funeral service, held at Sacred Heart Catholic Church in Muenster, may be viewed at https://www.facebook.com/KC1459/videos. Two scholarships have been established in Bailey’s memory. To donate, put “Bailey Walterscheid Memorial Scholarship” in the memo line and make out the check to Alumni and Supporters, Inc., P.O. Box 97, Muenster, TX 76252 for Sacred Heart Catholic School, or to Hardin-Simmons University, 2200 Hickory Street, HSU Box 16100, Abilene, TX 79698. Thank you all for your continued love and support.

Bailey Renée Walterscheid, 24, of Muenster, Texas, passed away suddenly on November 11, 2020. She was the namesake of Bailey Inglish, an early Texas settler, and was raised on land south of Muenster that has been in the Inglish family for generations.... View Obituary & Service Information

The family of Bailey Renée Walterscheid created this Life Tributes page to make it easy to share your memories.