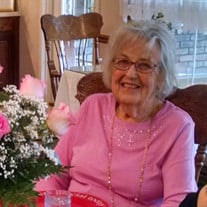 Funeral service for Bertha Ethel (Brant) Liller, age 95, of Nocona will be held at 10:00 AM on Friday, June 21, 2019 at Scott Funeral Home in Saint Jo. Bertha was born March 30, 1924 in Cumberland, Maryland, to Herbert Lester Brant and Lillian Zembower Brant. Bertha married Ernest Mitchell on May 17, 1941. Together, they had two daughters before he lost his life April 14, 1945 while serving our country in World War II. October 25, 1955, Bertha married Elmo Liller. They enjoyed 45 years of marriage before his passing in 2001. Bertha retired in 1996 after working her entire adult life as a beautician. Immediately after her retirement, Bertha and Moe left Cumberland, the only city they had ever called home, to make a new home for themselves in Saint Jo, Texas. Bertha was a strong woman of faith. While in Cumberland, she was a member of Trinity United Methodist Church. In Saint Jo, on April 7, 2002, she became a baptized member of First Baptist Church. More than anything, Bertha will be remembered for her sweet, gentle demeanor. Many who knew her said that they never heard her speak an unkind word. She was honest, trustworthy, considerate and could get a twinkle in her beautiful blue eyes and be incredibly ornery! She lived life simply and didn’t put on airs for anyone. She was truly appreciative for all she was blessed with during her lifetime and didn’t dwell on what was lost. She faced many adversities with strength and grace. Bertha loved her family dearly. She was a devoted daughter, sister, wife, mother, grandmother, and friend. She will be missed by all who knew her. Bertha leaves behind two daughters, Patricia Anne Delagrange & John, of Sugar Grove, Illinois; and Kathryn Jane Barker & Garland Jackson, of Terral, Oklahoma. She had 7 grandchildren, 12 great-grandchildren, and 2 great-great-granddaughters. Bertha will be returned to Cumberland, Maryland for her final resting place in The Garden of the Cross at Sunset Memorial Park. Interment will be at 11:00 AM on Wednesday, June 26, 2019.

Funeral service for Bertha Ethel (Brant) Liller, age 95, of Nocona will be held at 10:00 AM on Friday, June 21, 2019 at Scott Funeral Home in Saint Jo. Bertha was born March 30, 1924 in Cumberland, Maryland, to Herbert Lester Brant and Lillian... View Obituary & Service Information

The family of Bertha Ethel (Brant) Liller created this Life Tributes page to make it easy to share your memories.

Send flowers to the Liller family.