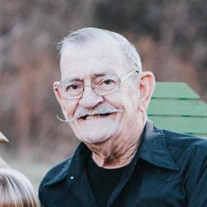 Funeral service for Bobby Powell, age 76, of Overland Park, Kansas will be held at 1:00 PM on Saturday, February 20, 2021 at Scott Funeral Home in Muenster. Burial to follow at Starkey Cemetery in Saint Jo. Mr. Powell passed away on February 12, 2021. Bobby Powell, 76, devoted husband, father, and papa, died on February 12, 2021 in Overland Park, Kansas. Bobby was born on March 3, 1944 to Arthur and Vergie Vera Powell (Haralson). He grew up in Saint Jo, TX and graduated from Saint Jo High School in 1962. He married the love of life Charlotte (Charlie) Powell on March 9, 1973 in Sanger, TX. They celebrated 47 years of marriage. He served in the Texas National Guard for six years and worked as a Printer for over 45 years. Bobby was a well-liked and respected man wherever he lived and made friends easy. Bobby and Charlotte raised their son Luke Powell while living in Denton, TX and moved to Burleson, TX for a number of years before living in Colwich, KS and then Overland Park, KS to be close to their grand-daughter Ruby, which brought him much joy in his last years. Bobby was easy-going, kind, and the type of a person you could count on to help with just about anything. He will also be remembered for his sense of humor, endless patience, and down-to-earth nature. Bobby is preceded in death by his parents, brother Ray Powell, brother Wayne Powell, brother Calvin Powell, brother Ed Powell, brother Jim Powell, brother Speck Powell, sister Sally Lipsey and sister Kathleen Crain. He is survived by his wife Charlotte of Overland Park, KS; son Luke, wife Annie, and grand-daughter Ruby of Overland Park, KS; sister Grace Talley of Decatur, TX; sister Donna Sue Lemons of Nocona, TX, and numerous nieces and nephews. In lieu of flowers, memorials can be made to Ruby Powell's college fund or Starkey Cemetery both in the care of Scott Funeral Home. PO Box 280 Muenster, Texas 76252

Funeral service for Bobby Powell, age 76, of Overland Park, Kansas will be held at 1:00 PM on Saturday, February 20, 2021 at Scott Funeral Home in Muenster. Burial to follow at Starkey Cemetery in Saint Jo. Mr. Powell passed away on February... View Obituary & Service Information

The family of Bobby Powell created this Life Tributes page to make it easy to share your memories.

Send flowers to the Powell family.