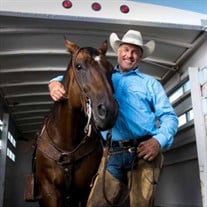 Brad William Johnson, beloved husband, father and cowboy, was called home to his Lord on February 18th, 2022.A graveside service will be held at Perryman Cemetery, February 27th at 2:00 pm. Anyone who knew Brad knows how difficult it is to sum up the details of his life on a single page. Born to Grove and Virginia Johnson on October 24th, 1959 in Tucson Arizona, Brad was a true renaissance man. He was not only interested in all life had to offer, but was gifted in it as well. Although he was taken too early, he lived life to the fullest. The son of a horse trainer, Brad grew up with a passion and love for the outdoors, and his younger years would see him hunting and competing in rodeo whenever he had the chance. Brad started his professional rodeo career in 1984, and the circuit would lead him to Dallas, Texas, where he would meet the love of his life, Laurie. They married October 11th, 1986, and were married for 35 very full years. While on the professional rodeo circuit, Brad was recruited by a movie scout which led to the beginning of his acting career. Prolific, he would appear in many commercials, magazines, films, and television shows, and became the face of Marlboro for a few years as the Marlboro Man. This brought the Johnson family to California. A few years later, his love for the outdoors would lead Brad and the family to purchase and move to a ranch in rural New Mexico. Brad greatly enjoyed improving and enhancing land, in a way that maintained and respected its natural beauty. After building a beautiful hunting lodge in New Mexico, Brad saw great success and enjoyment from guiding hunts while raising his growing family with his wife. He always felt most at home outdoors, and his passion for hunting made that evident. A man of many talents, Brad also filled his days restoring Model 1886 Winchester Rifles. For this he would come to be recognized as a master craftsman, as his rifles are showcased and cherished worldwide. He would continue to devote time to this art, even as his family moved to the mountains of Colorado. Their adventure would continue there for 4 years, before returning home to North Texas. As much as he loved cowboying and the outdoors, Brad loved nothing more than his family. He put them before himself in every way and they know that they could not have been blessed with a better husband and father. From life in the professional rodeo circuit, to a career on the big screen, to hunting bear and caribou in Alaska, to finishing his time selling ranch real estate in the rolling hills of North Texas that he loved, Brad truly seized and embraced all different paths of life. His wife and children will always cherish the memories that he gifted to them. He was larger than life. Brad was loved by many and loved people back, a genuine friend, trusted colleague, and a dedicated husband and father, he will never be forgotten, and his legacy will go on. Brad is preceeded in death by his parents Grove and Virginia Johnson and his sister Beth and is survived by his wife, Laurie, his eldest son Shane Johnson, his daughters; Bellamy and husband Brian Olomon and their 3 children, Rachel and her husband Layne Ellis, Eliana and her husband Jordan Williams, Eden and her husband Dylan Gressett who are expecting their first child, Rebekah Johnson, Annabeth Johnson, and his youngest son William Johnson. He is also survived by his step mother Teresa Johnson. His favorite quotes: “He taught his sons to be men, and his daughters to accept no less” “Do right and fear no man”

Brad William Johnson, beloved husband, father and cowboy, was called home to his Lord on February 18th, 2022.A graveside service will be held at Perryman Cemetery, February 27th at 2:00 pm. Anyone who knew Brad knows how difficult it is to sum... View Obituary & Service Information

The family of Brad William Johnson created this Life Tributes page to make it easy to share your memories.

Send flowers to the Johnson family.