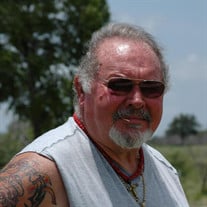 Military Funeral Honors for Charlie 'Waterboo' Oman will be held at 11:00 AM on Saturday, July 17, 2021 at Sacred Heart Cemetery. Video of the funeral service will be played at the VFW following the Military Honors. Charles Lee "Waterboo" Oman of Vanlue, Ohio, and Muenster, Texas, A True Marine Hero, entered into eternal rest April 19, 2021. Charlie was born to the late John W. and Irene H. (Wright) Oman on January 29, 1947. He married Brenda (Brumbaugh) Oman on December 31, 2007, who preceded him in death on January 29, 2021. Surviving is a daughter Annie (Joe) Garza of Tuscola, Texas; grandchildren: Madisson (Shawn) Srader, Morgan Garza, Rowdy Garza, Major Garza and great-grandson Jagger Srader. Also surviving is nephew Nathan Hartman of Haslet, Texas. Sister, Shirley Hartman also preceded him in death. Charlie enlisted in the Marine Corp in 1965 and served until November 30, 1967. He was a Lance Corporal in the 1st Battalion, 11th Marine, 1st Marine Division, Battery C. Charlie's honors include: Vietnamese Campaign Medal, Vietnamese Service Medal, National Defense Service Medal, Purple Heart Recipient and 2 Quilts of Valor. Charlie was nicknamed "Waterboo" from his Marine Corp buddies because they said he was built like a water buffalo. On April 21, 1967, Charlie was shot in Vietnam. He was rescued by Mike Company 3/1. His injury was life-threatening which left him paralyzed on the left side. Not one to ever give up, he overcame his injuries, ultimately walking again. Charlie celebrated his "LIVE DAY" April 21st from then on. He was a member of Sager Lodge 513 F&AM of Lafayette, Ohio. Life member of the Mount Blanchard Gun Club and Texas Trap Shoot Member. Charlie's idol was John Wayne and he loved driving his Aunt Lorine, "Miss Daisy" as he called her to Florida for the winter and back to Ohio in the spring. Services for Charlie are slated for Saturday, May 15, 2021, at the Vanlue Park Pavilion, Vanlue, Ohio. Masonic services will be at 10:30 a.m. with visitation from 11 a.m. until 2 p.m. The funeral service will follow the visitation at 2 p.m. with Reverend Cynthia Morrison officiating. Burial will take place following the service at Lee Cemetery, Vanlue, Ohio. Full military rites will be conducted by the Hancock County Veterans Memorial Squad at the cemetery. Donations in Charlie's honor can be made to ProMedica Hospice, 430 South Main Street, Clyde, Ohio, 43410 or Wounded Warriors Project, P.O. Box 758516, Topeka, Kansas 66675. Arrangements are entrusted to Coldren-Crates Funeral Home of Findlay, Ohio. COVID protocol will be followed. Online condolences are welcomed at www.coldrencrates.com

Military Funeral Honors for Charlie 'Waterboo' Oman will be held at 11:00 AM on Saturday, July 17, 2021 at Sacred Heart Cemetery. Video of the funeral service will be played at the VFW following the Military Honors. Charles Lee "Waterboo"... View Obituary & Service Information

The family of Charles Lee 'Charlie' 'WaterBoo' Oman created this Life Tributes page to make it easy to share your memories.

Military Funeral Honors for Charlie &#39;Waterboo&#39; Oman will be held...

Send flowers to the Oman family.