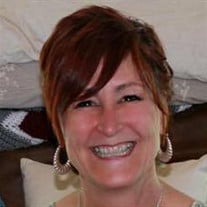 Memorial Mass for Cheryl “Sherrie” (Hess) Garcia, age 52 of Sanger, was held at 10:00 AM, Monday, July 10, 2017 at Sacred Heart Catholic Church with Father Ken Robinson officiating. Rosary was held at 6:00 PM, followed by a vigil at 6:30 PM on Sunday, July 9, 2017 at the funeral home. All services were under the direction of Scott Funeral Home in Muenster. Ms. Garcia died Wednesday, July 5, 2017. Cheryl Renee Hess was born on April 2, 1965 to Leo and Mary Lou (Vogel) Hess in Dallas. She began her schooling at St. Cicilia’s until the family moved to Muenster in her second grade year where she enrolled in Sacred Heart Catholic School. After the 8th grade, Sherrie went to Muenster Public School and graduated in 1983. Sherrie married Andy Garcia, Jr. in 1983 and they became the proud parents of Kacie Nicole. She worked at Weber Aircraft in the 80’s and 90’s until she found her true calling to serve others in the nursing field of phlebotomy. Two years after her mother Mary Lou passed away, Sherrie married Darren Beaudin on July 15, 2006. Although they divorced after seven years of marriage, they had recently rekindled their love. One of Sherrie’s proudest moments was when she became a grandma – or as she liked to be called “Gammie.” Sherrie had many trials and tribulations over the years. In 2016, she was lucky to have caught and beat breast cancer thanks to early detection and was confirmed to be in remission as of April 2017. But some of the roughest times in her life were dealing with depression and alcoholism. She had a strong support group, and another extended family, in her AA friends in Gainesville and Denton. She fought the fight, she ran her race, and went home to the Lord and her Savior Jesus Christ…she is with her mother again and is finally at peace. Sherrie is survived by her: daughter and son-in-law, Kacie and husband, Dusti Etter of Lindsay; grandchildren: Leo and Dusti Lou Etter of Lindsay; father, Leo Hess of Muenster; brother, Brian and wife, Danna Hess of Muenster; and nieces: Erin and Halle Hess of Muenster. She was preceded in death by her mother Mary Lou (Vogel) Hess. In lieu of flowers, the family requests donations be made in honor of Sherrie to Muenster Jaycees or the Gainesville AA Anchor Group.

The family of Cheryl "Sherrie" (Hess) Garcia created this Life Tributes page to make it easy to share your memories.

Send flowers to the Garcia family.