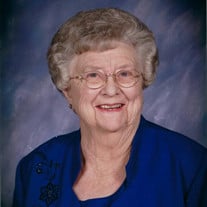 Mass of Christian Burial for Clara Helen (Raleigh) Klement, age 95, of Muenster will be held at 10:00 AM on Wednesday, July 22, 2020 at Sacred Heart Catholic Church. Rosary and Vigil will be held at 6:00 PM on Tuesday, July 21, 2020 at Sacred Heart Catholic Church. She passed away on Sunday, July 19, 2020. Clara was born on March 9, 1925, the youngest of seven children on the family farm in Stillwater, MN to William and Ida Kohler Raleigh. She graduated from Stillwater High School in 1943. After graduation, she worked in a department store in St. Paul. In 1944, her life took a turn where luck met opportunity. Her sister, Ann, had just had her second child and asked Clara to help her in St. Augustine, FL. It was here that she was introduced to Eugene Klement, who was stationed there while serving in the Coast Guard. They married in Stillwater, MN on January 8, 1947. They were married almost 54 years until his death in 2000. In 1956, Gene and Claire started their dairy business and were proud members of AMPI until they stopped milking cows in 1993. Their son, Andrew, joined the business in 1971. For 37 years, she milked cows twice a day and cooked three meals a day. She was renowned for her cooking and baking, and her cinnamon rolls were legendary. She was very social and loved playing cards and dominoes. She was also an avid reader. Claire took great pride in her children and grandchildren and never missed a family celebration. She was an ardent supporter of Sacred Heart School and believed in Catholic education. In honor of her sister, Ceil, she established the Klement-Raleigh Scholarship Fund at Sacred Heart School. She was a devout Catholic who attended mass and prayed the rosary faithfully. When she received her last rites, despite the difficulty, she folded her hands in prayer. She passed away peacefully at home on her farm, which was her dying wish. Clara (Raleigh) Klement is survived by sons, Charles, of Spokane, WA and his wife, Terry; Andrew and wife Emily of Muenster, TX; daughters Kaye Wimmer and husband Ray of Lindsay, TX; Judy Milner and husband Mark of Little Elm, TX, and Lynda Yosten and husband Doug of Muenster, TX. She is also survived by grandchildren Jenny Corcoran, Kristen Weinzapfel, Kelley Tackett, Allison Rix, Tara Wenzel, Laura Robeson, Adam Klement, and Gina Kolar, 17 great-grandchildren, and one great-great granddaughter. She is preceded in death by her husband Eugene Klement, her parents, brothers Bernard, Jerry, and Joe Raleigh and sisters Ceil Raleigh, Margaret Casey, and Ann Gorton.

The family of Clara Helen (Raleigh) Klement created this Life Tributes page to make it easy to share your memories.