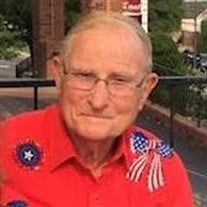 Clarence Edward ‘Sonny’ Cole passed away Thursday, July 18, 2019 in Nocona, TX. Funeral service was held at 11:00 AM on Monday, July 22, 2019 at Saint Jo Church of Christ with ministers Steve Chism and Chester Cullum officiating. Burial followed at Mountain Park Cemetery in Saint Jo. Visitation was held Sunday from 5:00-7:00 PM at Saint Jo Church of Christ. Sony was born on March 2, 1930 west of Saint Jo to John Henry and Vera (Loper) Cole. He married Eddie ‘Dee’ Dunn on October 20, 1948 in Tulia, TX. They were married 69 years when she passed away in 2017. He attended High Jones Elementary School and Saint Jo High School and Cooke County Junior College. The four children born to this unions are: Judy Taylor and husband Charlie of Saint Jo, Mike Cole and wife Lynetta of Alvord, Beck Smith of Saint Jo, and Tim Cole and wife Sherry of Fort Worth. The occupation Sonny was most proud of was his ministry with the Churches of Christ. He started part time at the very small community of Spence north of Saint Jo. He started fulltime at Forestburg in 1964, later moving to Bellevue and finally finishing his 50-year preaching career in Saint Jo. He passed his abilities of preaching and ministering on to his grandson, Steve Chism, who has now served the same Saint Jo church for almost 7 years. He not only had one occupation but also was the owner of The Saint Jo Tribune for 55 years. He and his wife Dee not only owned the business but worked diligently to make is successful and only stopped running it after he was stricken with the debilitation disease of Alzheimer’s. he touched the lives and hearts of so many people as he, with his loving wife at his side would selflessly do anything and everything and go anywhere just to offer their help and support anyone in need. He had a great love for good old-fashioned country music having played his guitar starting at age 6. He and Dee helped organize a local country band called Country-Cutups. They continued to have the local opry once a month for 25 years and played for events in the area. He is going to be greatly missed by his family of four children and spouses and grandchildren; Steve Chism, Mike Chism, Lee Kinnett, Josh Cole, Jared Cole, Nick Cole, Angie Dennis, Heather Currin, Matt Smith, N’Cole Smith, Wendy Cole-Olivares, Ryan Cole and Brant Cole. He is also survived by 14 great grandchildren and one great-great granddaughter. He was preceded in death by his wife, parents, and all siblings, four sisters: Wanda Talley, Jean Reed, Nola VanDusen, and Ola Mae Simpson. Arrangements were entrusted to Scott Funeral Home of Saint Jo, TX.

The family of Clarence Edward 'Sonny' Cole created this Life Tributes page to make it easy to share your memories.

Send flowers to the Cole family.