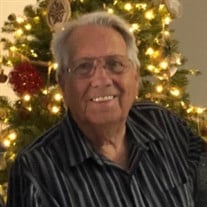 A graveside service for Dale Edgar Nolan, age 84, of Muenster will be held at 3 PM on Sunday, December 27, 2020 at Sacred Heart Cemetery. Visitation will be held at Scott Funeral Home from 1:00-3:00 PM on Sunday, December 27, 2020. Dale was born on May 14, 1936 in Madison, Illinois to Edgar David and Reba Rose (Anderson) Nolan. He married Ella Louise Lambert on February 28, 1974 in Gonzales, Louisiana. The two were married until her passing on February 27, 2002. He reunited with his wife when he passed from this world on December 23, 2020. Dale was an Industrial Engineer. He loved working on cars, watching western movies and tv shows, antique and junk shopping, spending time with his family, and meeting new people. Dale never met a stranger. He is survived by his loving children, daughters: Dena Lambert Holmes and partner Michele Holmes of Wylie, Texas, and Dawn Wann of Dallas; sons: Denny Fisher of Bells, Tennesse and Dany Fisher of Muenster; grandchildren: Nathan and wife Ashely Privett, Jace Wann, Brittany and husband Blake Rosier, and Logan Wann; and great grandchildren: Lainey Jo Privett and Bowen Rosier. Dale was preceded in death by his parents: Edgar and Reba Nolan; wife: Ella Nolan; and loving sisters and brothers.

The family of Dale Edgar Nolan created this Life Tributes page to make it easy to share your memories.

A graveside service for Dale Edgar Nolan, age 84, of Muenster...

Send flowers to the Nolan family.