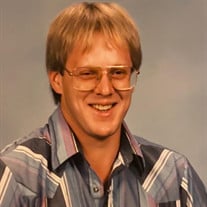 On Friday, Jan. 17, 2020, Darrell Peter Knabe, age 50, passed on from this world. Born on Sept. 19, 1969, Darrell was the youngest of the six children born to Arnold William and Aileen Koelzer Knabe. He lived in Muenster all of his life. Darrell and Carrie Covington were married on Dec. 29, 1995. They had three children, Meredith, Bren, and Zayne. For most of his life, Darrell worked on the family dairy farm with his Dad and brother Gary milking cows. After injuring his back, he took care of his young children, doing all the cooking, cleaning, and laundry. He most recently worked in the kitchen of El Fenix Restaurant at WinStar. Darrell, a history buff, was an encyclopedia of dates and facts and he had a passion for talking politics. As a youth, Darrell loved to play outdoors, in the fields, and with the farm animals. From an early age, Darrell enjoyed puttering around the kitchen. He often created his own recipes. He enjoyed baking pies and made the best pot pies. On Sunday afternoons, Darrell and his Dad loved to spend their time hunting for arrowheads. Darrell was very knowledgeable about arrowheads, trees and planting. He enjoyed writing short stories and even won an award. Darrell was designed by the same heavenly Father that we were all designed by. Some of Darrell's design made some things in his life difficult to deal with, but in spite of his flaws, he was a gentle person and enjoyed his children and cooking nice meals for them. They especially liked going to the movies and out to eat. Darrell suffered from mental illness and died as a result of it. He is survived by his daughter Meredith, sons Bren and Zayne, all of Little Elm; mother Aileen Knabe of Muenster, sisters and spouse Janet and Ross Felderhoff, Carol Sicking, all of Muenster, and Lorie Grewing of Bokchito, OK, brother and spouse Gary and Pam Knabe of Muenster; nieces and nephews Jody Felderhoff, Deann Vaughan, Toby Walterscheid, and Corey Sicking, all of Muenster, and step-nephews Jeff Felderhoff of Denton, Chris Felderhoff of Pottsboro, and Vince Felderhoff of Muenster. Preceding him in death were his father Arnie Knabe, sister Margie Walterscheid, grandparents Albert B. and Anna Knabe and Pete and Gertrude Koelzer, and niece Amy Hilton. A Vigil and Rosary service was held at Scott Funeral Home in Muenster at 6 p.m. on Tuesday, Jan 21. Rev. Joe Keating, pastor of Sacred Heart Parish, led the service. Darrell's life was celebrated during a Mass of Christian Burial held at 10 a.m. Wednesday, Jan. 22 in Sacred Heart Catholic Church. Rev. Joe Keating was the celebrant. Niece Deann Vaughan gave the Readings and offered the Prayers of the Faithful. Presenting Offertory gifts were Whitney Walterscheid and Samantha Muller Music was provided by Diane Grewing, Christi Klement, Doug Yosten, and Linda Flusche. Burial was held in Sacred Heart Cemetery following Mass. Services were under the direction of Scott Funeral Home of Muenster. Serving as pallbearers were nephews Toby Walterscheid and Corey Sicking, step-nephews Jeff Felderhoff, Chris Felderhoff, and Vince Felderhoff, great-nephews Ethan Muller and Logan Muller, and cousin Steve Koelzer. Memorials can be made to Sacred Heart School.

On Friday, Jan. 17, 2020, Darrell Peter Knabe, age 50, passed on from this world. Born on Sept. 19, 1969, Darrell was the youngest of the six children born to Arnold William and Aileen Koelzer Knabe. He lived in Muenster all of his life.... View Obituary & Service Information

The family of Darrell Peter Knabe created this Life Tributes page to make it easy to share your memories.

Send flowers to the Knabe family.