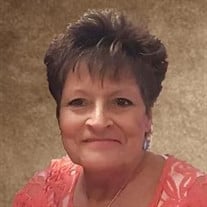 Funeral services for Debra “Debbie” Faye (Weed) Grewing, age 59 of Saint Jo, are set for 10:00 AM, Wednesday, December 6, 2017 at Friendship Church in Saint Jo with Pastor Curt Simmons officiating. Burial will follow in Mountain Park Cemetery in Saint Jo. Visitation will be from 6:00—8:00 PM, Tuesday, December 5, 2017 at the funeral home. Pallbearers are Lynn Henley, Mark Grewing, Bill Grewing, Justin Sutton, Brandon Weed, and Dave Muller. Arrangements are under the direction of Scott Funeral Home in Saint Jo. Debbie passed away Sunday, December 3, 2017 after a hard fight against cancer. Debbie was born on September 8, 1958 in Lubbock to Agnes Marie (Schmitt) and Roy Truman Weed. She attended Saint Jo High School later studying cosmetology at Cooke County College. She worked at Fischer’s Meat Market for 14 years where she made many friends. Debbie enjoyed spending time with family, playing computer games, sewing, and anything outdoors, especially taking care of all the birds outside. She loved to cook for everyone and was very good at it! Debbie was a loving grandmother, wife, daughter, and devoted mother of four children, Misti, Ashlee, David and Randy. She had the biggest heart and always put others before herself. Debbie is survived by the love of her life, Don Grewing of Saint Jo; daughters: Misti Moore of Saint Jo and her children, Gary and Gracie Clark; and Ashlee Heller of Decatur, her fiancé, Ryan Hesteande and their daughter, Saylor; Kristin McCoy of Muenster, her husband Jake and their children: Bailey, Martie and Carly; sons: David Heller of Muenster, his wife Mindy and their children: Carter, Braely, and grandbaby number fourteen due in April, and Brandon Grewing of Lindsay, his wife, Abbie, and their children: Jocelyn, Cassidy, Shelby, Leah and Blaise; sister, Gail Marie Boggess of Gainesville; brother, Sonny Weed of Saint Jo, and mother-in-law, Theresa Grewing of Myra. She was preceded in death by her parents and son, Randy Weed.

The family of Debbie Grewing created this Life Tributes page to make it easy to share your memories.

Send flowers to the Grewing family.