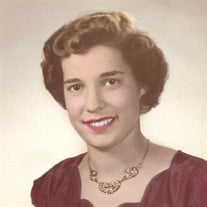 Mrs. Della Rose (Herr) Walterscheid, age 88, of Muenster, passed away at her home on Tuesday, February 22, 2022. A Rosary and Wake Service were held at 7:00 PM on Friday, February 25, 2022 at Sacred Heart Catholic Church, with her nephew, Fr. Kyle Walterscheid, presiding. Instrumental music included Della’s favorite song, “Gentle Woman,” with Matthew Burkepile on violin and Jonathon Toni on piano. The eulogy was read by her grandson, Josh Walterscheid. A Mass of Christian Burial was held 1:00 PM on Saturday, February 26, 2022 at Sacred Heart Catholic Church, with Fr. Ken Robinson officiating. Granddaughters Jessica Bowman and Brooke Walterscheid presented the readings, and Brooke offered the prayers of the faithful. Another of Della’s much-loved hymns, “Ave Maria,” was sung at the Offertory by Jonathon Toni. Interment followed at Sacred Heart Cemetery, with all nine of her grandsons serving as pallbearers. Della Rose was born on August 4, 1933 to Ida Mae (Roberg) and Frank Fred Herr. The Herr Family lived in a small house on North Main Street in Muenster, Texas, where she attended Sacred Heart School and graduated in 1951. She met Denis Gilbert Walterscheid at her senior prom, and just nine months after their first date, they were married on April 15, 1952. Settling into the same homestead where Denis had grown up, they became parents of seven children. With such a large family there was much cooking to do, and living on a farm meant that meals might be served at the table or on the tailgate of a pickup in the field. But Della was happiest when feeding those she loved. Her large chicken house yielded extra eggs to sell at the feed store in town, and one jersey cow provided plenty of milk and enough cream for the butter churn. Summers were spent canning and freezing produce from her garden, and most Saturdays she baked enough cinnamon rolls to cover every surface in the kitchen. Like her mother, Della taught her own daughters to cook and to sew. Having four boys also meant that she spent many fall nights sitting in the bleachers with other moms, watching sons play football, hoping they won, but mostly praying no one got hurt. An active member of Sacred Heart Parish, Della became President of St. Anne’s Society in 1977 and served for more than a decade. Making an Acts Retreat and being part of the Acts Community was very dear to her, just as it had been for Denis. As a member of the Catholic Daughters of America, many Saturdays were spent helping to clean the church, and she worked alongside other CDA members to prepare and serve countless meals to families after funeral services. Della was also very devoted to the Blessed Mother, and prayed the rosary every day without fail. Throughout Della’s entire life, food was the common thread that wove faith and love together. She taught us that every meal began and ended with a prayer of blessing and thanksgiving. In the simplest of ways, she gave of herself by feeding her family with love, and by feeding others with charity. Even during the last few difficult weeks of her life, she was still asking about having enough food in the house for everyone. Della and Denis lost their oldest son, Kenneth, in an accident on October 26, 1971. Having just celebrated 57 years of marriage, Denis died on May 18, 2009. Theirs had been a partnership in everything they had vowed to do on their wedding day – love, honor, cherish, and be faithful. Working side by side, Denis and Della enjoyed building their cattle herd, and she’d even climb up into the tractor cab with Dad to go feed hay. With the help of her sons, Della did her best to continue that work after he was gone, driving his truck through the pastures to count heads and check on baby calves. Della also loved to sit on her patio, surrounded by her treasured red geraniums, watching cardinals come to her feeder. Grandma Della will be especially missed by her grandchildren and great-grandchildren, who knew she wanted to hear everything about school activities, plans for college, and even their disappointments too. Every Grand knew their way to her “cookie drawer,” always full of goodies like nutty buddies and oatmeal pies. Hers was the kind of love that will always be a part of God’s beautiful plan – to make each grandchild, each great-grandchild, feel special. During a recent visit, she was very happy to hear her great-granddaughter talk excitedly about plans for her August wedding. And just a few weeks ago, she held her newest great-grandchild in her arms. Della is survived by six children and their spouses: Darlene (Bill) Bartush, Denise (Fred) Fuhrmann, Deborah (Jack) Schoppa, Phil (Adelia) Walterscheid, Ted Walterscheid, and Bret (Kim) Walterscheid. In addition to 17 grandchildren and 19 great-grandchildren, she is survived by one sister, Joanie (Jim) Price, and two brothers, Ronnie (Alma) Herr and Tommy (Virgilla) Herr, as well as numerous nieces and nephews. Della was preceded in death by her parents, son Kenneth, husband Denis, and two brothers, Melvin Herr and Charlie Herr. For those wishing to honor the life of Della Rose, the family requests that memorial donations be made to The Catholic Daughters of America.

Mrs. Della Rose (Herr) Walterscheid, age 88, of Muenster, passed away at her home on Tuesday, February 22, 2022. A Rosary and Wake Service were held at 7:00 PM on Friday, February 25, 2022 at Sacred Heart Catholic Church, with her nephew, Fr.... View Obituary & Service Information

The family of Della Rose (Herr) Walterscheid created this Life Tributes page to make it easy to share your memories.