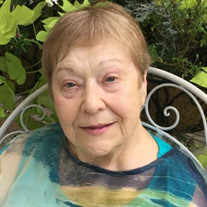 Dolores Frances Marie Elizabeth Reiter was born December 5, 1940 to Hilda and August (Gus) Reiter. She was the fifth youngest of ten children. She married Melton Edwin Vrla on June 6, 1958. Together they had us four children, Sonja, Melton Jr. (Butch), Corey and Nikki. She has five grandchildren and one great grandchild. Dolores served as a scout leader and a den mother for all four kids. At that time, she was an avid bowler, a Dallas City Champion and a member of the 600 club. When her children decided to get involved in gymnastics at the Farmers Branch Recreation Center, she became a gym mom. One day in 1971 she was pulled from the stands to judge her first meet. She became a certified judge in 1974 and was involved in the establishment of the North Texas Women’s Gymnastics Judging Association. Her reputation found her at the side of Marta Karolyi when she defected to the USA. In 1997, she was recognized with the first ever NTWGJA Lifetime Achievement Award and in 2017, and she was recognized by the Gymnastics Association of Texas (GAT) with the Service to Youth Award. She retired from judging in June of 2018. Dolores found her greatest pleasure while cooking. It’s an understatement to say she cooked a lot. She cooked every day and it made her happy to send mountains of food home with all her family and friends at any gathering. She was also very passionate about helping others. She was a pillar of strength whenever she could be. She always wanted to help people in need and would have given her last dollar along with the coat off her back and food for a month. She wanted to comfort everyone around her. She especially enjoyed her years working with the elderly at The Area Agency on Aging. As her health declined, one her favorite things was her limousine power scooter. She loved riding it and the freedom it gave her. She rode around the lake and through the neighborhood, and she especially enjoyed shopping and driving through the racks of any department store. Dolores is survived by her children, their spouses, her grandchildren and great grandchild and her sister Bernice Sicking, bothers, David Reiter, Donald (Don), Allen Reiter and Roy Reiter, and numerous nieces and nephews. She was predeceased by her sister Patricia Reiter and brothers Jerome (Jackie) Reiter, Leonard Reiter, William (Billy) Reiter. Dolores touched the hearts of many and she leaves an amazing legacy. A Celebration of Life will held Saturday, February 15, 2020 at The Branch Church in Farmers Branch at 3:00 pm. (3035 Valley View Lane, Farmers Branch, TX, 75234) In lieu of flowers, Dolores asked for donations to the Trump2020 campaign to make America great again.

Dolores Frances Marie Elizabeth Reiter was born December 5, 1940 to Hilda and August (Gus) Reiter. She was the fifth youngest of ten children. She married Melton Edwin Vrla on June 6, 1958. Together they had us four children, Sonja, Melton Jr.... View Obituary & Service Information

The family of Dolores Frances Marie Elizabeth Reiter created this Life Tributes page to make it easy to share your memories.

Send flowers to the Reiter family.