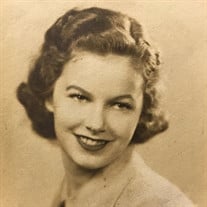 Dorothy Mae (Covey) Hampton, age 95 of Montague, TX passed away on Saturday, September 16, 2017. Dorothy was born in Houston, TX on November 11, 1921 to Brooks J and Mary Frances (Walker) Covey. She lived in New Orleans, LA, Oakland, CA, Fort Worth and Dallas TX, but resided in Montague, TX for over 35 years. Dorothy graduated from North Dallas High School in 1939 and met her husband Milton Hampton in class. They married in 1942.  In her early years, Dorothy shared Milton's love of deer hunting.  She once shot one of the biggest Texas bucks of the year, an 11 pointer weighing 170 pounds, in Laredo Texas. A 250 yard shot from the top of a car into a clearing in the brush. Dorothy had many hobbies which included: gardening, cooking, crocheting and the country way of life. She had a green thumb with raising African Violets, Day Lilies, Aloe Vera and Iris. She greatly affected the lives of her grandchildren by teaching them to cook, swim, and enjoy the great outdoors in Montague.  Dorothy is survived by her grandchildren: Renee Lorenz of Dallas, Kerrie and Jay Gerrie of Austin, Kelly and Amy Hampton of Southlake, Lisa Medina and fiancé Lloyd Durocher of Frisco, nine great-grandchildren, one great-great-grandchild, and nieces and nephew: Martha Benoy of Celina, Betty Ann Bonneau of Richardson, and Alan Cypert of Dallas. She was preceded in death by her husband, Milton Hampton, parents, Brooks J. and Mary Frances (Walker) Covey; son, Kenneth Hampton, grandson, James Hampton, and sisters: Mary Nell (Covey) Chancey and Ruth (Covey) Cypert. Visitation will be 1:00 – 2:00 PM Tuesday, September 19, 2017 at Scott Funeral Home in Saint Jo, TX. Graveside service will be at 2:30 PM Tuesday, September 19, 2017 at Montague Cemetery with Rev. E. Sam Campbell officiating. Arrangements have been entrusted to Scott Funeral Home in Saint Jo.

The family of Dorothy Mae (Covey) Hampton created this Life Tributes page to make it easy to share your memories.

Send flowers to the Hampton family.