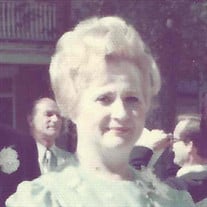 Mass of Christian Burial for Dorothy Arlene (Kendron) Hesse, age 82, of Muenster was held on Thursday, Oct. 17, 2019 at Sacred Heart Catholic Church. Mrs. Hesse passed away on Saturday, Oct. 5, 2019. Dorothy was born In Chicago, Illinois, on Aug. 24, 1937 to Adam and Bernice (Bauer) Kendron. She was preceded in death by her husband, Judge Paul Hesse, her parents, her brother, James, her sister, Alice and her niece, Susan. She was also predeceased by her father-in-law and mother-in-law Meinrad and Ida Hesse, and brother-in-law Richard Hesse and sister-in-law Janis Hesse. She is survived by her sister, Lois Allen (Robert), nephew, Dr. Douglas Allen (Christie), nieces Katherine Allen, Katherina Kendron, Dominique Kendron and, nephew Roark Kendron. She is also survived by her brothers-in-law: Tom Hesse (Lucille) and John Hesse (Geri), and her sisters-in-law: Suzanne Williams, Eileen Georgia (Glenn) and Mary Hesse as well as numerous nieces and nephews. She attended Chicago Wright Junior College. She worked as a telephone operator for AT&T. She did a lot of secretarial work and worked for a travel agency. She and Paul babysat for their friends’ children when they were overseas. Dorothy married Judge Paul Hesse on Jan. 2, 1971, in Sacred Heart Church in Muenster (Paul's hometown). She and Paul lived in Germany and Saudi Arabia (places of Paul's employment). They loved traveling to many parts of the world during their lives together. Later, they built a home on their farm in Muenster, Texas. They lived there until their deaths. Paul died in 1997. Dorothy told her sister that she loved Paul's family, and she loved living in Muenster. She felt so at home there. Dorothy was a generous and kind soul. She donated to many charities and supported the church and school. She would easily part with her belongings. She felt especially close to the Blessed Mother and always carried a rosary in her purse. The joys of her life were her two golden Labrador retrievers, Bailey and Brandy. She enjoyed her time with her quilting group, shopping with friends, traveling with friends — especially Dolores Cervenka, and going to the movies. She went to a lot of birthday celebrations and always spent holidays with the Hesses and friends — often hosting the Hesse Christmas parties.

The family of Dorothy Arlene (Kendron) Hesse created this Life Tributes page to make it easy to share your memories.

Send flowers to the Hesse family.