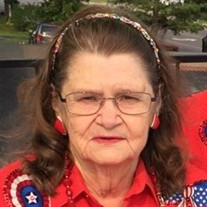 Funeral services for Eddie “Dee” (Dunn) Cole, age 87 of Saint Jo were held at 2:00 PM, Wednesday, October 4, 2017 at the Saint Jo Church of Christ with burial following in Mountain Park Cemetery. Visitation was held Tuesday, October 3, 2017 from 5:00 – 7:00 PM at the church. Pallbearers were her grandsons: Mike Chism, Josh Cole, Jared Cole, Nick Cole, Matt Smith, Eric Dennis, Leslie McMahan, Ryan Cole, Bryant Cole, Rodney Currin, and Cesar Olivares. Arrangements were entrusted to Scott Funeral Home in Saint Jo. Mrs. Cole passed away Sunday, October 1, 2017. One of nine children, Dee was born June 4, 1930 in Dye Mound, TX to Milton and Sula (Cook) Dunn. She married the love of her life, Clarence E. “Sonny” Cole on October 20, 1948 in Tulia, TX. They were the proud parents of four children. They were both employed at the Saint Jo Tribune in the early 60’s, then later leased it and soon became the owners, and that continues to this day – over 50 years. She continued to work at the Tribune until her health prevented it sometime during 2016. Dee and Sonny helped to organize and were members of a country western band, “The Country Cutups,” for 25 years. Although she had many titles in her life, Dee’s most important ones were wife, mother, and Granny (her favorite). She was a faithful member of Saint Jo Church of Christ and a Sunday school teacher. Her favorite occupation was “preacher’s wife.” She was beside her husband, Sonny, every step of the way during his over 50 years of preaching all the while raising their children. He always says without her he could not have done any of it. Dee is survived by her husband of 69 years, Clarence E. “Sonny” Cole of Saint Jo, daughters: Judy and husband, Charlie Taylor of Saint Jo and Becky Smith of Saint Jo; sons: Mike and wife, Lynetta Cole of Alvord and Tim and wife Sherry Cole of Fort Worth; thirteen grandchildren; fourteen great-grandchildren; and brother Melvin “Snooks” Dunn of Saint Jo. She was preceded in death by her parents, Milton and Sula (Cook) Dunn; sisters: Betty Martin and Elwanda Dunn; brothers: Jack Dunn, Cruse Dunn, Lynn Maddox, Raymond Maddox, and Frank Dunn; and son-in-law, Ricky Smith.

The family of Eddie "Dee" (Dunn) Cole created this Life Tributes page to make it easy to share your memories.

Send flowers to the Cole family.