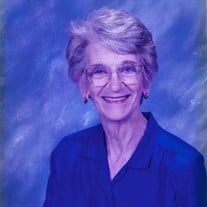 Funeral services were held for Ethel Mae (Bayer) Hesse on February 8, 2021 at Sacred Heart Catholic Church. A Rosary and vigil service was held on February 7th. Ethel passed away on February 4, 2021. Fr. Kyle Walterscheid and Fr. Ken Robinson officiated the funeral. Beautiful music was provided by Mary del Omo, accompanied on the piano by Shirley Hatfield. Grandchildren serving as pallbearers were Angela Chapman, Matthew Devers, Daniel Hesse, Joe Hesse, Julian Hesse, Morgan Lutkenhaus, Charlene Pryor and Katherine Steinert. Ethel Mae was a New Year’s Baby, born January 1, 1932 to her loving parents Joseph and Gertrude Bayer. She joined 3 older brothers and lived on the family farm northwest of Muenster. Ethel attended Sacred Heart School and graduated as Salutatorian of her class in 1949. Generous measures of joy and laughter were a part of her young life. One of the greatest joys was her marriage on August 11, 1953, to Leo Hesse. Ethel and Leo were blessed with 5 children. Ethel was known for her homemade bread, cinnamon rolls and cookies. In addition to that, she was a skilled seamstress and enjoyed crafting items for home décor and clothing for her children. She was very creative and loved to sing and dance and was a proficient Scrabble player. Ethel’s servant heart called her to generous volunteerism for many years. She gave thousands of hours of her time volunteering for ABBA, Muenster Public Library and Muenster Memorial Hospital. It is noteworthy that she received the President’s Lifetime Achievement Award for serving over 4000 volunteer hours and was presented this award at the 2016 ABBA Banquet. She was a member of the Muenster VFW Ladies Auxiliary and Sacred Heart’s Mixed Choir for many years. She is survived by her children, Margie Devers, Joan Golaz and husband Charlie, Bert Hesse and wife Christy, Tina Walterscheid and husband Bert, and Mark Hesse and wife Melanie, as well as 22 grandchildren and 11 great-grandchildren. Also, sisters Sr. Roberta Hesse, Caroline Neu, Chris Sanders, Jane Myrick and husband Jim, and Bernard Hesse and wife Agnes, and sisters-in-law Frances Bayer and Evie Hesse, and numerous nieces and nephews. Ethel Mae was preceded in death by her parents, her husband, Leo, her brothers, Alfred, Robert and Arthur Bayer, her grand-daughter Barbara Devers and sons-in-laws Billy Devers and Cliff Cox. Also going before her were her sisters-in-law Anna Marie and Rosalie Bayer, and brothers-in-law Ramie Hesse, Harold Neu and Sandy Sanders. She was not ready to leave her family, but understood the promise that God gave her, and is now joined with so many of her loved ones that she had lost during her life, and we are certain that she has been welcomed into Heaven, with the beautiful greeting: Well done, good and faithful servant: because thou hast been faithful over a few things, I will place thee over many things. Enter thou into the joy of thy Lord. (Matthew 25:21) In lieu of flowers, memorials can be made to ABBA, Muenster Volunteer Fire Department, or Sacred Heart Trust Fund.

The family of Ethel Mae Hesse created this Life Tributes page to make it easy to share your memories.

Send flowers to the Hesse family.