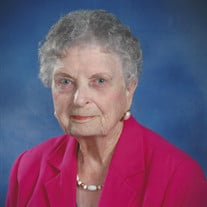 Mass of Christian Burial for Evelyn Bernice (O’Connor) Monday, age 95, of Muenster were held on Tuesday, October 2, 2018 at 10:00 AM at Sacred Heart Catholic Church in Muenster. Burial followed at Sacred Heart Cemetery. Rosary and Vigil for Mrs. Monday were held on Monday, October 1, 2018 at 6:00 PM at Scott Funeral Chapel in Muenster. Pallbearers for Mrs. Monday were Craig Monday, Stanley Wimmer, Johnathan Monday, Joseph Monday, William Covington, Jeff Wilde, Matt Wilde and Hugh Hennessey. Services were under the direction of Scott Funeral Home in Muenster. Mrs. Monday passed away on Saturday, September 29, 2018. Evelyn was born on January 27, 1923 to Andrew Frank O’Connor and Cecilia Margaret “Sadie” (Nieman) O’Connor. Evelyn’s early life was spent on a dairy farm. In 1964, the family moved from the farm into town. In 1965, she went to work for Russell-Newman in Saint Jo, where she would work for 14 years. In 1979, Evelyn left Russell-Newman to go work at Weber Aircraft where she would be employed until her retirement 15 years later. After retirement, she enjoyed SNAP and delivered Meals on Wheels to the home bound. Evelyn also enjoyed trips to Shreveport with her friends. When WinStar opened, she enjoyed going there for breakfast and fun with her friends. Other days when nothing was going on, she would go over to WinStar for a few hours just to pass the time. Mrs. Monday was a very hard worker. She lived alone and was very independent. She was always ready to go and help anyone in need. She finally had to give up her home in November of 2017. That following January, she moved to River Valley Health and Rehabilitation Center in Gainesville and lived there until God called her home. Mrs. Monday is survived by daughters: Dolores and Charles Wimmer of Edmond, Joan and Randy Starr of Sanger, Shirley and Gregg Wilde of Liberty Hill; sons: Roy and Jane Monday of Muenster, and John Monday of Muenster. Mrs. Monday is also survived by sixteen grandchildren and 28 great-grandchildren. Mrs. Monday is preceded in death by her parents Andrew and Sadie O’Connor; Husband: Andrew Monday; and her sister Cecilia (O’Connor) Fry.

The family of Evelyn Bernice (O'Connor) Monday created this Life Tributes page to make it easy to share your memories.

Send flowers to the Monday family.