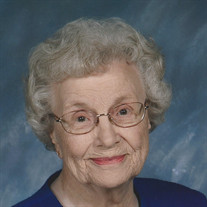 Fern Catherine LeBrasseur of Muenster, Texas died Tuesday afternoon, December 19, 2017 in North Texas Medical Center in Sherman. Survivors are her son, Jon LeBrasseur and his wife Monica of Muenster, Texas and daughter-in-law, Karen LeBrasseur of Middleton, Connecticut. Also, one brother, Harry Smith, Jr. and his wife June of Allegan, Michigan; and three grandchildren: Richard LeBrasseur, Jr. of Denver, Colorado, Andrea LeBrasseur of Centerbrook, Connecticut, and Kristin LeBrasseur of Muenster, Texas. Preceding her in death were her husband, Clayton, son, Richard, parents Julia and Harry Smith, brother, Robert and sister, Jane. Fern LeBrasseur was born in Phillips, Wisconsin on September 2, 1918. She attended school in Wausau, Wisconsin and upon high school graduation she attended college and became a teacher. A few years later she moved to Nahma, Michigan and began work as a secretary/bookkeeper for Bay de Noquet Lumber Company and there she met her husband Clayton LeBrasseur. Fern married Clayton at San Carlos Mission in Monterey, California on August 29, 1942 before he shipped out to North Africa for WWII. Bay de Noquet Lumber Company was sold to American Playground Device where she continued her employment until retirement. Fern and her husband Clayton moved to Escanaba, Michigan where they enjoyed their retirement until she moved to Muenster in 2002. She was a member of Sacred Heart Catholic Church in Muenster. Her hobbies included knitting, reading, politics and watching most sports. Visitation was at Scott Funeral Home in Muenster on Thursday evening, December 21, with a rosary at 6:00 PM. Mass of Christian Burial was Friday at 10:00 AM at Sacred Heart Catholic Church in Muenster, officiated by Rev. Ken Robinson. The First Reading from the Old Testament was given by Linda Sepanski and the Second Reading from the New Testament by Dolores Hofbauer. Offertory gifts of bread and wine were presented by Clayton and Clint Bezner. Sacred music was presented by Christy Hesse, Quinn Sicking and Isaac Davis. Pallbearers were Dale Schilling, Harvey Schmitt, Nolan Hartman, Angela Haley, Katy Bezner and Madison Ladzinski. Final committal will be January 5, 2018 at 10:00 AM in Escanaba, Michigan at Garden of Rest Mausoleum. The family has suggested memorials be sent to The Sacred Heart Teacher Sustentation Fund -153 E. Sixth St. Muenster, Texas 76252.

The family of Fern Catherine LeBrasseur created this Life Tributes page to make it easy to share your memories.

Send flowers to the LeBrasseur family.