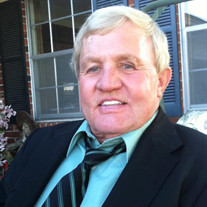 Dr. Gerald “Bud” Graham, 78, passed away on September 8, 2020. There will be a Celebration of Life planned for him in near future. Bud was born on July 16, 1942 in “Lake Country” Spavinaw, OK to Helen McClure Graham and Roy ”Pepper” Graham. He attended Spavinaw grade school, and then graduated from Jay High School in 1960. He met Donna Triplett while attending school in Jay and that was the beginning of their lifelong love for each other. They both attended college at Northeastern State University in Tahlequah, OK and they married April 5, 1963. Bud always had big plans for his life, from an early age he showed the world what kind of man he would be-determined, generous, and mischievous. At 5 years old he knew he wanted to be a dentist and never looked back. After graduating from Northeastern State, he attended dental school at St. Louis University. He graduated from dental school in 1968, and then worked on a mobile dental unit for the state of Missouri while waiting to obtain his Texas Dental license. Fortunately for the community of Muenster a close family friend from Collinsville, TX knew that the Muenster Hospital Board was looking for a dentist and put Bud in touch with them. Bud and Donna moved to Muenster in August 1968 and he opened his first office inside Muenster Memorial Hospital. It was at the time when they first moved to Muenster that Bud and Donna met numerous people who became their lifelong friends, who are now considered family. He stayed in the hospital for 3 years, and then moved his office into the building that is now the Muenster Health Clinic. He continued his practice there until he built his own office building in 1986, which is where his daughter Mindy Klement is now a dentist, and daughter Lori Kislack is a dental hygientist. He embraced the community of Muenster and Muenster welcomed him with open arms. Bud had many hobbies throughout the years. He grew up living next to a lake hunting and fishing, which translated into his love of hunting and boating as an adult. He enjoyed golf for many years, and he enjoyed collecting cars, trucks, knives, guns, and cowboy boots. Everyone in town knew him by his big red shiny truck. He also really enjoyed keeping up with the latest innovations in dentistry and attended countless hours of continuing education to provide the best dental care possible for his beloved patients. Bud worked hard and played hard. He was one of the friendliest guys you’d ever meet and had a great sense of humor. He would give you the shirt off his back, or he might drink all of your beer, or play a practical joke on you. He dearly loved his family, friends, and community. He loved life and lived it to the fullest, leaving all of us with many Bud stories. Bud is survived by wife Donna (Triplett) of Muenster, daughter Mindy and husband Chris “Topher” Klement of Moss Lake, daughter Lori and husband Shane Kislack of Lewisville, TX granddaughters Elena and Tessa Kislack, grandsons Carter and Brady Klement, sister Gloria and husband Stan Washburn of Denver, CO, brother Leroy and wife Suzanne Graham of Palacios, TX, and numerous brothers and sisters in law, and nieces and nephews. He was preceded in death by his parents and two infant sons. Memorial donations can be made to Muenster ISD Education Foundation, Muenster Volunteer Fire Department, or Muenster Jaycees.

The family of Dr. Gerald Morris 'Bud' Graham created this Life Tributes page to make it easy to share your memories.

Send flowers to the Graham family.