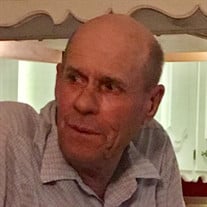 Gilbert Gary “Tudy” Hess passed away at his home on Wednesday, January 30, 2019, after an almost 8 year battle with cancer. Gilbert Hess was born on October 30, 1949 in Muenster, Texas to Albert Justin “Slim” Hess and Agnes Margaret “Knabe” Hess. Gilbert was the 6th of 10 children. He grew up in Muenster and attended Sacred Heart Catholic School, he graduated in 1968. Gilbert was drafted into the Army in 1968. He served in the 66 engineer company in Vietnam. Gilbert was honorably discharged at the rank of specialist receiving 5 medals in 1970. After returning from Vietnam Gilbert started working for Bayer Concrete. During his lifetime he also worked for Muenster Milling Company, Biffle Oil Company, Martindale Feed Mill, Becker Dozer and finally retired after working for Cooke County Precinct 3 as the yard supervisor. He married Shirley Becker in Muenster on June 29, 1974. They had 3 children. Darrin, Jill and Kimberly were raised north of Muenster. Gilbert made sure the family attended Sacred Heart Catholic Church every Sunday, where he was an usher. During summertime there were yearly camping trips to Fob Bottom at Lake Texoma with family and friends. Gilbert had a love for the outdoors and made sure the family got to enjoy it right along with him. He frequently took the family fishing to various ponds around Muenster, there were also many family dove hunts. Gilbert loved many things in life. He enjoyed golfing in Friday night scrambles at Turtle Hill, hunting and fishing. He also worked part time during deer season at H&W Meat Company skinning deer. His love of gardening was instilled in his family and he especially enjoyed having his grandchildren join him. Gilbert was a member of VFW post 6205 where he was commander from 1988 – 1990. He was a member of Sacred Heart Catholic Church where he volunteered to chair the parish picnics with his wife Shirley for many years. Gilbert also was a Knights of Columbus member. Gilbert is survived by his wife Shirley; son: Darrin and wife Jessica, daughters: Jill and husband Jeremy Walterscheid and Kimberly and husband Braden Fitts all of Muenster; Grandchildren: Colby Hess, Kalyn, Carly and Logan Walterscheid and Martin Fitts; mother-in-law Gloria Becker of muenster; brothers: Leo, Melvin and wife Mary, Timothy and Clarence all of Muenster, sisters: Angie and husband Cy Yosten of Greenville and Florence Stockard of Gainesville, sisters-in-laws: Tommie Sue Hess, Mary Ann Hess, Judy Hess and Brenda Becker all of Muenster. Gilbert was preceded in death by his parents Albert and Agnes Hess; father-in-law Martin Becker; brothers: Patrick, Earl and Virgil Hess; brother-in-law Paul Becker and sister-in-law Mary Lou Hess. Rosary and Vigil for Gilbert Gary “Tudy” Hess was held at 6:30 PM on Friday, February 1, 2019 at Scott Funeral Home in Muenster with eulogy given by nephew Rodney Hess. Mass of Christian Burial was held at 10:00 AM on Saturday, February 2, 2019 at Sacred Heart Catholic Church with Fr. Ken Robinson officiating. Burial followed at the Sacred Heart Cemetery. Pallbearers were Henry and Jon Knabe, Mark and Michael Yosten, Joe Becker, Brian and Stuart Hess and Leon Knauf.

The family of Gilbert Gary 'Tudy' Hess created this Life Tributes page to make it easy to share your memories.

Gilbert Gary “Tudy” Hess passed away at his home on Wednesday,...

Send flowers to the Hess family.