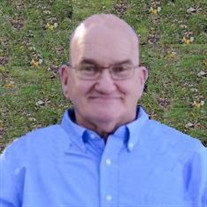 Mass of Christian Burial for Harvey Lynn Lamkin, age 75, of Muenster, will be held at 10:00 am, Saturday, August 25 at Sacred Heart Catholic Church in Muenster with Fr. Ken Robinson officiating. Burial will follow in Sacred Heart Cemetery. Rosary and vigil will be held at 6:30 pm, Friday, August 24 at Scott Funeral Home in Muenster. Harvey was born June 9, 1943 in Bowie, TX and died peacefully on August 21, 2018 at home. Harvey joined his grandson, Dakota in heaven on Dakota's 18th birthday. He had missed him so much, so how fitting it was for him to enter eternal life with Dakota and what a celebration we are sure that was. He was born to William and Lennie Lamkin. They raised him and his three sisters in Saint Jo, TX where Harvey graduated from high school. Harvey married Mary Pels on August 23, 1969 at Sacred Heart Catholic Church in Muenster. They are the parents of two children: Kelly Lamkin and Eddie Lamkin. They also have three grandchildren: Madison Lamkin, Dakota Lamkin and Lynsey Lamkin. Harvey loved the outdoors, he liked to hunt and fish. When his kids were young he enjoyed trips to the lake. He enjoyed tinkering outside in his shop. He was a welder and enjoyed that passion. He was fondly known as the "Junk man" or "Old Harv, the Junkyard Dog." He never met a stranger, he could carry his weight in a conversation. He enjoyed time with his family especially the grandkids who so fondly called him PaPa. He will be greatly missed by his family and friends. He is survived by his wife of 48 years, Mary; daughter, Kelly Lamkin; son, Eddie and wife Carol Lamkin; two grandchildren; sisters Carol Ann and husband Walt Carter; and Judy and husband Paul Duke; and several nieces and nephews. Harvey was preceded in death by his parents; sister, Sue Hare and grandson, Dakota Lamkin. The family asks that memorial donations be made to Home Hospice of Grayson, Cooke and Fannin Counties or the Muenster Volunteer Fire Department.

The family of Harvey Lamkin created this Life Tributes page to make it easy to share your memories.

Send flowers to the Lamkin family.