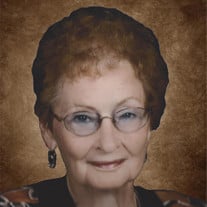 A Mass of Christian Burial for Helen Ann Luttmer Cundiff, 85, of Lindsay, is scheduled for 10:00 AM on September 4, 2018 at St. Peter's Catholic Church, Lindsay. Interment will follow at St. Peter's Cemetery, in Lindsay. A Rosary/Vigil will be recited at 6:00 PM on Monday, September 3 at the funeral home. The family will receive friends following the Rosary. A second Rosary for the family will be recited at 9:00 AM on September 4 at the funeral home prior to the Mass. Arrangements are under the direction of Scott Funeral Home in Muenster. Helen passed away on August 29, 2018 in Gainesville. Helen was born April 20, 1933 in Muenster to John J. Haverkamp and Elizabeth M. (Wiesman) Haverkamp. She attended Sacred Heart Elementary School and graduated from Muenster Public High School in 1951. She married Walter J. (Wally) Luttmer at Sacred Heart Catholic Church in Muenster on October 23, 1951, and they were married almost 47 years until Wally’s passing on March 28, 1998. Helen and Wally lived on the beautiful family farm north of Lindsay since 1963. After Wally’s passing, Helen married Lucian (Bud) Cundiff on July 21, 2001. She was a member of St. Peter's Catholic Church in Lindsay. Helen was a wonderful mom to 4 sons (Wayne, Roger, Kenneth and Robert) and 1 daughter (Diane), and grandmother to 16 grandchildren and great grandmother to 28 great grandchildren and 3 great-great grandchildren. Helen loved her family and always looked forward to the family gatherings at Easter, Thanksgiving and Christmas. In addition to taking care of her family, Helen worked at and retired from Weber Aircraft after 30 years. Survivors include: husband: Bud Cundiff; sons: Wayne Luttmer and wife Cathy of Muenster; Roger Luttmer and wife Carol of Lindsay; Kenneth Luttmer and wife Kelly of Coppell; Robert Luttmer of Thackerville; and daughter Diane Sicking and husband Carl of Myra; a sister, Evelyn (Haverkamp) Hesse of Denison; a brother-in-law, Willard Zimmerer; sister-in-law, Maria Haverkamp; and many beloved grandchildren, great-grandchildren and great-great grandchildren. She will also be remembered by many nieces and nephews. Helen was preceded in death by: her parents; her husband, Walter; brothers: Leo J. Haverkamp and Ferd Haverkamp, sisters: Leona Luke, Cecilia Cooper, Bertha Sturm, Bernice Kupper, Rosabell Zimmerer and infant sister Agnes Haverkamp. Pallbearers are grandchildren: Mark Luttmer, Jeremy Luttmer, Greg Luttmer, Jake Luttmer, Brandon Sicking and David Walters. Memorial contributions may be made to: Home Hospice of Cooke County.

A Mass of Christian Burial for Helen Ann Luttmer Cundiff, 85, of Lindsay, is scheduled for 10:00 AM on September 4, 2018 at St. Peter's Catholic Church, Lindsay. Interment will follow at St. Peter's Cemetery, in Lindsay. A Rosary/Vigil will... View Obituary & Service Information

The family of Helen Ann (Haverkamp Luttmer) Cundiff created this Life Tributes page to make it easy to share your memories.

A Mass of Christian Burial for Helen Ann Luttmer Cundiff, 85,...

Send flowers to the Cundiff family.