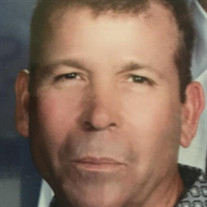 A memorial mass for Henry Lewis “Hank” Bayer will be held Friday May 22, 2020 at 10:00am at Sacred Heart Catholic Church. Rosary and vigil is Thursday May 21, 2020 at 6pm at Sacred Heart Catholic Church. Hank passed away on Monday May 11, 2020. The mass will be lived streamed on the Sacred Heart website for those who cannot attend. Hank was born August 28, 1962 in Gainesville to Robert and Rosalee Bayer. He grew up on the family homestead just north of Muenster and later built his home on the same land. His childhood was spent working with his dad plowing fields, tending to their cattle, sheep, and chickens. He loved riding horses, fishing, rabbit hunting and playing with his sisters, brothers, and cousins. He graduated from Muenster High School in 1980. As a young child Hank was taught by example the importance of faith in god, dedication to hard work, and devotion to family and friends. Honesty was the best policy and embracing life with a good dose of dry humor made life that much better. We will all remember that big smile he’d get on his face right before he was about to say something funny. And, that great laugh and big grin he had after delivering his humorous lines. In 1980 at the age of 17 and still in high school, he started working as a rough neck on a drilling rig with JJ Biffle. He made such a good hand that Herkie helped him get his CDL so he could drive the big drilling trucks moving heavy oilfield equipment. During his time with JJ Biffle he became involved in Jimmy Jacks cattle ranching business and worked in his commercial feedlot. One winter, Hank spent three months in Nebraska working with cattle and tending to their large feedlot. In appreciation for his dedication and hard work, JJ Biffle drilled a water well on the family homestead for Hanks mom Rosalee. In 1992, during the oilfield decline he went to work for the Cooke County Electric CoOp as a lineman. He quickly progressed into a First-Class Lineman driving their only hydraulic side boom drilling machine. It was a brand new one of a kind pieces of equipment for the CoOp and he volunteered to take on the challenge of learning and driving this big machine. Hank and Michelle Prigmore married September 19, 1998. On March 3, 1999 Michelle and Hank welcomed their new baby boy Anthony James into the world. Anthony was a happy baby and brought much joy to their lives. Later the same year Hank was proud to adopt Michelle’s son Johnathan Paul. It was an active, hectic, and fun household raising Anthony, John, and stepson Brett Adam Morris. Hank wanted to instill in his children the same work ethic that he learned from his parents. Hank helped Johnathan start up his own lawn cutting service. He taught all the boys about integrity, respect, and self-discipline. He later worked as a maintenance manager at RMI, worked on a backhoe for Matt Sicking, was a machinist at Universal and spent the last two years working for the City of Muenster. His friend Tim Hess shared the following: Hank had the biggest heart. If you needed help whether it was building something, fixing something or helping Tim cook at a fundraiser Hank was there for you….he had his hands in it and wanted to be a part of it. Years ago, Tim and Hank would meet up after work at the Judy Ranch to work cattle. When Tim arrived Hank would be listening to Paul Harvey’s radio show. At the end of story Paul would reveal who the story was about. But, before that happened, Tim quickly said the person’s name. And Tim was always right. Hank would say…” Tim you are the smartest person!” Well, this routine at the farm went on for quite a while until Tim finally revealed that he heard the same show earlier in the day so he knew who the story was about before he reached the farm. They got the biggest laugh out of it. His friend David Fisher shared these thoughts: “He was a good friend. He would do anything for you. If Hank stopped by the house and I was working on some project like chopping wood Hank would ask…. what’s the problem…Did you forget my telephone number or did you lose my number? Hank was always the first in line to lend a helping hand.” The last couple years were spent tirelessly taking care of his mother, maintaining the family homestead, and planting and harvesting a beautiful vegetable garden. We think he would most liked to be remembered as a good and faithful son, brother, friend and most importantly a father filled with deep love and admiration for his son Anthony and the wonderful young man he has become and his constant love for Johnathan and Brett. Hank is survived by his sons Anthony and Johnathan, stepson Brett, grandchildren Saida Isabel and Adrian Ishmael, brother Carl Bayer and sister in law Sandy, sister Carolyn Lawrence, sister Dolly Owen and brother in law Harold, sister Betty Cole, brother Allen Bayer and sister in law Christi, sister Susan Lancaster, thirteen nieces and nephews and many beloved aunts, uncles, cousins and friends.

The family of Henry Lewis "Hank" Bayer created this Life Tributes page to make it easy to share your memories.

A memorial mass for Henry Lewis “Hank” Bayer will be held Friday...