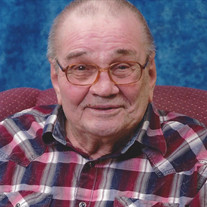 Mass of Christian Burial for Herbert Miller, age 90 of Muenster was held at 10am on Friday November 15, 2019 at Sacred Heart Church in Muenster with Fr Joe Keaton and Fr Kyle Walterscheid officiating. Burial followed in Sacred Heart Cemetery under the direction of Scott Funeral Home. Herbie died November 11th at Pecan Tree Rehab and Healthcare Center in Gainesville. Born March 23. 1929 in Muenster, Herbie was one of nine children of Theo and Rose Miller. He was a lifelong resident of Muenster and a graduate of sacred Heart High School. For three years after graduation, he did work at a service station and dozer work. In 1950 he went to work at Muenster Milling and drove a truck delivering grain, In 1959 he opened a liquor store and later became a partner owning 6 stores in Muenster, Lindsey, Wichita Falls, Windthorst and archer City. Herbert married Dolores Henscheid on April 24, 1950. In 1955 they built a home on North Maple and lived there for 13 years. In 1968 they built a new home on 3 acres on Cherry Lane. Herbie and Dolores bought 15 acres of land and developed it himself providing homesites for the new area of homes in Muenster. Herbie bought a used bulldozer and did his own site work including making a creek to allow for water to move through the area without flooding homesites. He was also one of the first to use underground utilities in this development. Herb and Dolores had four children, Kathy, Glenn, Gayle and Bert. They were also blessed with 15 grandchildren and 10 great grandchildren. Herbie served his community as a city councilman, served on the parish counsel, and was active with the Kiwanis and chamber of commerce. He was also part of the community leaders that worked to start Germanfest in the 1970’s. Survivors include daughter and husband Kathy and Dave Berres, and their children Troy , Aaron Berres and his children Ava and Dylan Berres and Neil Berres and Jessica Cannon and her children Owen and Colin Cannon: son Glenn and wife Stacie Miller and their children Dana Fuhrmann, Kristen Fort, Lisa Trubenbach, Austin Miller and Lauren Miller; daughter Gayle and husband Sean Burke and their children Amelia and Julie Burke; and son Bert and wife Debi Miller and their children Ryan, Travis, Derek and Tori Miller; great grandchildren Jasmin, Morgan, Mason and Erik Berres, and Brooke Fuhrmann and Landon Trubenbach; brother Ted and wife Cindy Miller, sister Carol Henscheid, and sister Marilyn and husband Randy Bayer. He was preceded in death by his wife Dolores, his parents Theo and Rose, sisters Rosabelle, Bernice and Barbara and brother Bill and brother Paul. Family members participating in the funeral mass and wake and prayers included Stacie Miller who lead the rosary before the funeral mass. Kathy Berres gave the readings at the mass. Gayle Burke read the prayers of the faithful and Amelia Burke and Kristen Miller carried the offertory gifts. Lauren Miller masterfully played two songs on the piano to perfection in a time of meditation at the wake. Linda Flusche, a niece and daughter of brother Bill was a music minister. Bert Miller gave the eulogy after the wake, the eulogy was actually a collaboration of the memories of the grandchildren and children of Herbie as they provided their favorite memories and thoughts and the one word they would use to describe these thoughts. The one words include fun, joyful, lighthearted, welcoming, caring, strong, comedian, wisdom, virtuous, ornery, bubble gum, active, loving, sweet, carpenter, artist, devoted, pilot, insightful, entrepreneur and musician. The eulogy also include input from those attending as many stories were told about the days when Herbie flew his airplane. Also, many memories of the visits to the liquor store and all the bubble gum and licorice for the kids. Herbie was always very encouraging to his kids as they chose their vocations. Herbie was remembered for the joy he brought to all with his music as he played the accordion and harmonica. The grandkids all loved the many tractor rides with Grandpa as he pulled a trailer around Muenster with all the grandkids in tow. A special appearance was made at the eulogy by Herbie the Angel( played by his son Bert) Herbie’s message was not to be sad , but be happy as he was in heaven. Herbie brought news from all this that had passed before him and that he had already seen in heaven. Of course, the Miller clan was active with many card games of Sheepshead. Dolores greeted him at the gates of heaven with a pack of Salem cigarettes, a glass of whiskey and a slice of raisin pie. Herbie concluded the eulogy with some of his favorite sayings and ever optimistic outlook on life that we should all “keep doing what you’re doing”— that is love of God, family, faith and community. Pallbearers were grandsons Ryan, Derek and Austin Miller, Neil and Aaron Berres and nephew Shaw Henscheid. For one last tractor ride with Grandpa, the procession from the church following the funeral mass to the cemetery was a tractor ride with trailer for the Herbie’s coffin and grandkids and many other relatives. Nephew And son of Herb’s sister Barbara, Bill Felderhoff provided his tractor and a trailer with hay bales for seats. Bill drove that tractor with love and care taking Uncle Herbie to his final resting place. Bill was honored to do so, but commented the only thing he could not do was “have as big a smile as Herbie did when he drove his tractor” At the graveside ceremonies and at the wake, grandson Derek Miller played his accordion playing Grandpa’s favorite song “you are my sunshine” Herbie the Angel requests that memorials be given to Sacred Heart Trust Fund supporting the school that he sent all his kids to and where he and Dolores graduated from.

The family of Herbert Mathew 'Herbie' Miller created this Life Tributes page to make it easy to share your memories.

Mass of Christian Burial for Herbert Miller, age 90 of Muenster...

Send flowers to the Miller family.