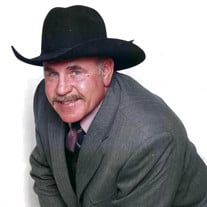 Mass of Christian Burial for Herbert Sicking, age 71, of Muenster was set for 10 a.m. on Tuesday, June 1, 2021, at Sacred Heart Church with Father Joseph Keating officiating. Burial followed at Sacred Heart Cemetery under the direction of Scott Funeral Home in Muenster. A vigil was held at 6 p.m. on Monday, May 31, 2021, at the funeral home. Mr. Sicking was born April 18, 1950, and passed away May 25, 2021. Herbie was the seventh of ten children born to Bernard and Adeline Yosten Sicking, both of Muenster Tx. Herbie spent his childhood helping on the family farm south of Muenster. He graduated from Muenster High School in 1968 and spent the next two years in the United States Army. He returned home and attended The University of North Texas, graduating with a degree in Accounting. He worked for more than two decades at the Gainesville State School, but the job he always loved most was farming and ranching with his children by his side. Herbie is survived by his wife Darlene Sicking, his son Bart Sicking and wife Lucie, daughter Jessamy Hermes and husband Brian, son Clint Sicking, daughter Lynn Burge, two bonus children Destani Erwin and Nathan Wyatt, as well as his 6 grand children. Herbie is also survived by his brothers and sisters, Jim and Gloria Sicking, Judy Kittler, Melvin and Sheila Sicking, Wayne Sicking, Donna and Don Schad, Michael and Martha Sicking, Denise and James Landers, his brother-in-law Wilie Joe Matthews and a host of nieces and nephews. Herbie was preceded in death by his parents, sisters Lorraine Matthews and Betty Schneck, and brothers-in-law Bill Schneck and Ben Kittler.

The family of Herbert Frank 'Herbie' Sicking created this Life Tributes page to make it easy to share your memories.

Mass of Christian Burial for Herbert Sicking, age 71, of Muenster...

Send flowers to the Sicking family.