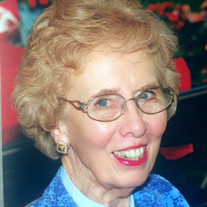 Imelda Mary (Felderhoff) Rohmer, age 92, passed on to eternal life on Friday, April 28, 2018. Mass of Christian Burial is set for 10:00 AM, Friday, May 4, 2018, at Sacred Heart Catholic Church in Muenster, Texas, with Father Ken Robinson, pastor, as celebrant. Burial will follow in Sacred Heart Cemetery. A Rosary service will be held at 4:00 PM, on Thursday, May 3, 2018, at Scott Funeral Home in Muenster. A Vigil service is scheduled for 7:00 PM that evening at Sacred Heart Catholic Church, with Visitation following at the Community Center. All services are under the direction of Scott Funeral Home in Muenster. A lifelong resident of Muenster, Imelda was born on the family farm northwest of Muenster on March 22, 1926, the third of five children born to Joseph “Joe” and Mary Elizabeth (Wieler) Felderhoff. In 1932 the family moved into the Wieler house at the corner of Third and Pecan Streets, which included a two-block property. After their father’s tragic death in 1937, the children assured their mother that hired help would not be necessary; they would be able to take on all tasks that needed to be done. In 1944 Imelda graduated as class valedictorian from Sacred Heart High School, after which she was employed by Muenster State Bank. At the Thanksgiving dance that fall, through friends and cousins she met Arnold Rohmer, who had just recently returned from the service. They married on April 24, 1946, at Sacred Heart Catholic Church. With the approaching birth of their first child, Imelda became a full-time homemaker. Always busy, she did everything, from cooking, baking, canning, freezing, sewing, and gardening to yardwork. In the early years she enjoyed being a member of the Muenster Civic League and Garden Club. With her six children born over a span of 22 ½ years, Imelda was always very involved in supporting school and church activities and fundraisers. She was also a steady presence in the care of her mother, who had built a home next door. In 1966 Imelda began working as a clerk at the Muenster Post Office, at first part-time, then fulltime until her retirement in 1992. In 1975 she saw her husband, Arnie, suffer a debilitating stroke. In love and faith, life carried on. While the responsibilities of this devoted wife, mother, and daughter were substantial, throughout the years her ministry of love and service extended well outside the home. Be it taking a meal to shut-ins or a family in need, providing the elderly with a ride to Mass, taking the time to listen to someone’s concerns, or helping a new family to feel welcome in Muenster, she never failed to reach out to others with a bright smile and warm heart. An embodiment of sacrificial love, always putting others before herself, she would readily go the extra mile to help anyone in need. During her many years as treasurer of the community’s Social Concerns Committee, Imelda was the channel for financial assistance for those in dire straits; just as importantly, she brought them the comfort and strength of her great love, deep faith, and strong prayer life. Passionate about the beauty and cleanliness of the community, she was also a member of the Keep Muenster Beautiful Golden Oldies. Imelda had a long history of service to Sacred Heart Parish, including serving on the Stewardship and Liturgical Committees and serving as a lector, lector trainer, Eucharistic minister, and greeter. Elected in absentia, for 15 years she graciously served as president of the St. Anne’s Society. As a Catholic Daughter Imelda was known for the well-liked coleslaw she made for funeral dinners. A leader for Monday evening Marian devotions, she was often also called upon by families to lead rosary services. And until the technology became outdated, for decades she broadcast a taped rosary over Channel 2. A member of the Sacred Heart Home & School Association for the 35 years her children were in school, in her later years Imelda lovingly devoted countless hours to beautifying the flowerbeds of Sacred Heart Catholic School. This humble doer of “little things” was recognized by the Muenster Jaycees as 2007 Citizen of the Year. Also selected as Sacred Heart’s 2010 Catholic School Honoree, she was the recipient of the Diocese of Fort Worth’s Outstanding Service Award. Since her stroke on September 3, 2017, Imelda lovingly continued doing good for others, joining her suffering to that of Christ and offering it up for the salvation of the world. Imelda is survived by her six children, Donald (Barbara) Rohmer and Linda (Robert) Sepanski of Muenster, Donna (Olon) McClendon of Dallas, and Mary Uhlig, Christi (Frank) Onion, and Julie (Martin) Collins of San Antonio; ten grandchildren; a sister, Mary Ann Walterscheid of Muenster; in-laws Viola Rohmer and Ella Mae Rohmer of Muenster and Patrick McCallion of Tuscon; and numerous nieces and nephews. Preceding her in death were her beloved husband, Arnie, in 1999; her parents; granddaughter Kathryn “Kate” Sepanski Voth; sisters infant Eleanor Felderhoff and Sr. Georgia Felderhoff, O.S,B.; brother, Arthur Felderhoff, and his wife, Evelyn; and sister Mary Ann’s husband, Norbert Walterscheid, and son, Ricky Walterscheid; and son-in-law Donald “Donnie” Uhlig. In lieu of flowers, the family would gratefully appreciate donations to support Sacred Heart Catholic School, through either the Sacred Heart Teachers Sustentation Fund (Trust Fund) or The Alumni Corp. & Supporters. Donations can be made at shmuenster.com or mailed to P.O. Box 97, Muenster, TX 76252.

The family of Imelda Mary (Felderhoff) Rohmer created this Life Tributes page to make it easy to share your memories.

Send flowers to the Rohmer family.