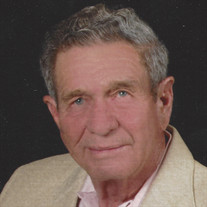 Mass of Christian Burial for James David Hess, age 79 of Muenster is set for 10:00 AM, Monday, April 17, 2017 at Sacred Heart Catholic Church with Father Ken Robinson officiating. Burial will follow in Sacred Heart Cemetery. Rosary and vigil will be held at 7:00 PM, Sunday, April 16, 2017 at the funeral home. All services are under the direction of Scott Funeral Home in Muenster. Memorials may be made to Sacred Heart Catholic School or to the Charity of your choice. James was born May 12, 1937 to Gary and Caroline (Knabe) Hess. He was the firstborn child of the family of thirteen children. LaVerna Hess Nasche and Quintin Hess shared the same birthdate. James worked from the age of 6, helping his parents on the farms they worked. He attended Sacred Heart Catholic School from the age of 6 in 1943 to high school years. When they bought the Bayer place on Highway 373, James and his father had a cattle drive from the Parky Place 4 miles northeast of Muenster to their new home on S. 373. James joined the US Army at the age of 18 and was sent to Germany. He became a jeep driver for his Captain in his motor pool. One day, James had a short leave and he and some buddies went into Denmark. That day, he met Birthe Nielsen at Tivoli Gardens in Denmark. She became his wife on January 25, 1959, in Denmark at Sacred Heart Catholic Church. James ran a gas station on Highway 82 in Muenster for several years before gaining employment out of Odessa, Texas and on to Kuwait and Santa Fe International Oil Company. James spent 5 years working in Kuwait and he moved the first drilling rig into Saudi Arabia from Kuwait. Then, later, he went from driller to Operations Manager of 10 drilling rigs. They lived in Kuwait, Saudi Arabia and Beirut, Lebanon, during his career with Santa Fe International. Then, he bought the Walterscheid place and the Hoenig farm and went into farming and ranching. He enjoyed raising Charolais cattle, farming and improving the land and making 2 nice farms he was so proud of. After Birthe’s death on March 10, 1994, James married Carol Ann (Stevens) Henley, a Gainesville elementary school teacher, on December 21, 1996. She taught school in Muenster for several years before retiring to help James on the farm. They enjoyed making his farm a beautiful place. James is survived by his wife, Carol Ann (Stevens) Hess; children: James Gary Hess, Una Johnson and Gina Tanner; stepchildren: Rob and Gina Henley, Jon and Helene Henley and Gary and Kathleen Henley Muller; grandchildren: Kate and Lauren Henley, Garrett, Trenton and Kenley Muller and Ava and Jon Henley, Erik Tanner and Ashley Johnson; sisters: LaVerna Nasche, Mary and Gary Endres, Gloria and J.D. Coker; brothers: Jerry and Monica Hess, Leon and Rachel Hess, Frankie Hess, Doyle and Debbie Hess, Gene and Debbie Hess, Chris and Lori Hess. He was preceded in death by his parents, Gary and Caroline (Knabe) Hess, first wife, Birthe (Nielsen) Hess, brothers, Quintin Dale, and Dwayne Hess. Pallbearers are: Gary Muller, Jon Henley, Rob Henley, Greg Hess, Gary Hess, Chris Hess, Ryan Hess, and Aaron Hess.

The family of James David Hess created this Life Tributes page to make it easy to share your memories.

Send flowers to the Hess family.