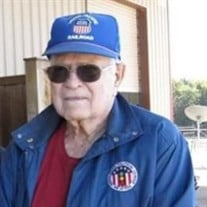 Graveside rites for James L. Snapp Jr. of Saint Jo were held in Center Point Cemetery, north of Saint Jo, Monday morning, November 18, 2019 at 11 am following a visitation at Scott Funeral Home from 10:00 to 11:00 am. James died Nov. 15th at Baylor Scott & White Medical Center in Carrollton, TX. Teresa Wahl, daughter-in-law of James' late wife, presided at the graveside rites with tributes from others. James was born February 27, 1935 in west Texas. The family moved back to Bonita in Montague County in 1935, the county where his father had been born. They bought a farm four miles north of Saint Jo in 1938. James attended school at Mt.View and Saint Jo. He graduated with the Class of 1953. Very shortly after his graduation, he caught the train for Chicago, IL where he went to work for The Rock Island Railroad. He continued in this work until he retired in 1997, working all over the midwestern states. Following his retirement, he and his late wife, Marie, build a home in Saint Jo. They enjoyed traveling in their motor home for many years. Marie died in 2017 and James continued living in his home. Their son, Kevin, has been his primary caregiver for the past two years. James loved gardening and shared his bounty of vegetables with many people in Saint Jo. James is survived by three sons, Kevin, of Saint Jo, Danny of Astoria, OR and Mark of Spokane, WA., three grandchildren, Ginny Lou Snapp, Deven Nicole Snapp, and James Snapp; four great-grandchildren; one sister, Roberta Price of Saint Jo; and several nieces and nephews. He was preceded in death by his parents, James Lawrence Snapp, Sr. and wife, Frances Snapp; a sister, Oneita Snapp Harrill, and a brother, Louis Deward Snapp.

The family of James Lawrence 'J.L.' Snapp Jr. created this Life Tributes page to make it easy to share your memories.

Send flowers to the Snapp family.