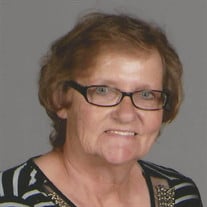 Janet Sue (Klement) Fisher, age 66, of Muenster, Texas, passed away on Tuesday, May 1, 2018, surrounded by family and is now with the Lord. Liturgy of the Word was held at 10:00 AM, Saturday, May 5, 2018, at Sacred Heart Church with Father... View Obituary & Service Information

The family of Janet Sue (Klement) Fisher created this Life Tributes page to make it easy to share your memories.

Send flowers to the Fisher family.