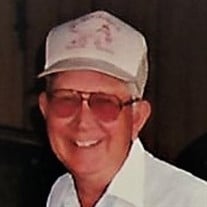 Funeral service for Jerral Don (JD) Goff, age 81 of Saint Jo, is set for 2:00 PM, Friday, February 24, 2017 at First Methodist Church in Saint Jo. Burial will follow in Mountain Park Cemetery. A visitation will be held from 7:00—8:00 PM, Thursday, February 23, 2017 at the funeral home. All services are under the direction of Scott Funeral Home in Saint Jo. Mr. Goff died Monday, February 20, 2017. Jerral Don was born on July 15, 1935 in Walters, OK to Jesse G. and Beulah (Blakeley) Goff. His family moved to Saint Jo when he was in the fourth grade and except for two years in Pampa, TX, this is where he spent the rest of his life. He graduated from Saint Jo High School in 1953 and immediately went to work in the oilfield where he worked until he finally realized his dream of having cattle and horses. He married Mary Kathryn Martin on December 30, 1955. They were blessed with three sons, Curtis Don, Jerral Wayne and Michael Gene. Jerral Don served a number of years on the Saint Jo ISD school board and many years as Secretary-Treasurer of Katy Rod and Gun Club, and in his younger years he was a member of the fire department. He was a long time member of Jean's Men's Bible Class, and he was baptized by Bro. Sam Campbell. He is survived by his wife, Mary Kathryn (Martin) Goff of Saint Jo; son: Curtis Goff and wife Kathryn of Saint Jo; daughters-in-law: Ann Goff of Nacogdoches and Kirsten Goff of Saint Jo; grandchildren: Jeffrey Goff and wife Whitney of Tomball, TX, 1st Lieutenant Taylor Goff and wife Niki of Killeen, TX, Curry and wife Katy of The Colony, TX, Ryan Goff of Denton, TX, Kaili Gaston of Saint Jo, and Bobby Goff of Saint Jo; great-grandson, Asher Jerral Goff of Tomball, TX; brother-in-law, Bob Martin and wife Jeanette of Tow, TX; and sister-in-law, Karen Martin of Ada, OK, niece Melinda Martin of Carrollton, TX, and nephew Andrew Martin of Waco, TX. He was preceded in death by his parents, Jessie G. and Beulah (Blakely) Goff and his sons, Jerral Wayne Goff and Michael Gene Goff. Pallbearers were: Jeffrey Goff, Ryan Goff, Curry Goff, Taylor Goff, Doyle Cook, Doug Gaston, Brad Rogers and Lendon Williams. Honorary pallbearers were Kaili Gaston and Bobby Goff. In lieu of flowers, the family requests memorial donations be made to the Saint Jo ISD Education Foundation, PO Box 116, Saint Jo, Texas, 76265.

The family of Jerral Don (JD) Goff created this Life Tributes page to make it easy to share your memories.

Send flowers to the Goff family.