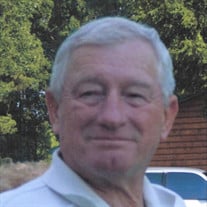 Jerry Glynn Shofner, Marine, Sailor, Father and Golfer, passed away peacefully on Valentine’s Day surrounded by his loving family. A private family service will be held at a later date. Born on August 26, 1935, in Wichita Falls to Charles Harlon and Laura Kathryn (Cooper) Shofner, he grew up in Capps Corner, Texas. After graduating from high school in Saint Jo, he enlisted in the United States Marine Corps and went off to boot camp. After three years as a Marine, Jerry put down his rifle, transferred, and enlisted in the Unites States Navy. His Navy orders took him farm from his home in Texas. During the Vietnam War, he served aboard the aircraft carrier USS America and was aboard the USS Forrestal during the devastating flight deck fire. Jerry served and enjoyed several tours overseas in exciting and exotic places like Morocco (Where daughters Deborah and Sonya were born), Brazil, and Puerto Rico. Chief Shofner then ‘endured’ back-to-back tours in Key West during the last 60s and early 70s serving as lead yeoman on the flag staff at the Truman Annex. During this ‘arduous tour’ he and the girls spent time fishing and diving, and Jerry resumed polishing his golf game. Final orders sent Jerry to Cecil Field in Jacksonville, where his final daughter, Patricia, was born. Jerry retired as a Senior Chief out of Attack Squadron One Seventy-Four with just over 24 years of service to his country. He and his family stayed in Jacksonville for several more years where he continued to work at Cecil Field as civilian. After his girls grew up and left home, Jerry moved back to his hoe town of Saint Jo, ran the local hardware store and met the love of his life, Margaret. Jerry and Margaret spent the next 33 years traveling, going on adventures together and enjoying their families. Most of all, they enjoyed each other’s company and shared that love with dozens of cats that they took in over the years in Saint Jo. Throughout his life, Jerry was an ardent and passionate golfer. Early dreams and opportunities to turn pro presented themselves, but the calling to serve took his life in other directions and gave him wonderful experiences overseas, serving his country and raising a family. But all through it, jerry continued to play golf as much as possible, often still shooting his age, until health issues forced him to set aside the clubs and stick to playing the 19th hole. Jerry is survived by wife: Margaret; daughters: Deborah Carmean, Sonya Van Gheem, and Patricia Jelenek; stepchildren: Marie Broyles, Kenneth Haynes, and David Haynes. He is also survived by 10 beautiful grandchildren and 6 great grandchildren. He was preceded in death by parents: Charles and Laura Shofner; twin brother: Don; daughter: D’Ann; and his first wife: Blanche Shofner.

Jerry Glynn Shofner, Marine, Sailor, Father and Golfer, passed away peacefully on Valentine&#8217;s Day surrounded by his loving family. A private family service will be held at a later date. Born on August 26, 1935, in Wichita Falls to Charles... View Obituary & Service Information

The family of Jerry Glynn Shofner created this Life Tributes page to make it easy to share your memories.

Send flowers to the Shofner family.