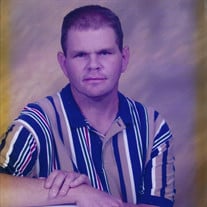 On Tuesday, Jan. 26, 2021, Jody Ross Felderhoff, age 42, lost his battle with oral cancer and died in Presbyterian Hospital in Denton. Jody was born on July 5, 1978 at Muenster Memorial Hospital to Ross and Janet Felderhoff. He lived his entire life in his hometown, Muenster. Throughout high school he was asked to serve as manager for the Sacred Heart Tiger football team, a job he thoroughly enjoyed. After, graduating from Sacred Heart Catholic School in 1997, he worked full-time as a dairy hand for his Grandpa Knabe and Uncle Gary. He later worked in maintenance at Muenster Memorial Hospital, Muenster ISD, and Nortex. He faced many health complications throughout his life. When he was 18 months old his kidneys failed. He was the first young patient in North Texas to use peritoneal dialysis at home. He received a kidney from his dad just before turning three. The transplant filled him with life and energy and he felt good for the first time in his life. Being immunosuppressed caused him many complications throughout his life. In September, of his senior year he was attacked by a Holstein bull and suffered a broken hip. After Jody graduated, he became very sick and was found to have histoplasmosis, a fungal disease caused by birds. This caused his kidney to fail and he went back on dialysis. He had also contracted hepatitis C from a blood transfusion as a child. This was before anything was known about it and it was discovered when Jody was being treated for his broken hip. In 2005, he received a kidney and liver transplant. The immunosuppression medication he took to keep his body from rejecting the transplants, eventually led to the cancer which caused his death. Even though he endured many illnesses and suffering, Jody was never once heard to complain. Jody joined the Muenster Jaycees out of high school. He enjoyed being a member of this group and served in several positions throughout the years. In 2020, Jody had the honor of joining his father when he was named a JCI Senator in Texas by the organization. They are the first father/son Senators in the Muenster Chapter. His hobbies included deer hunting, trot lining, collecting guns and knives, cooking, spending time at the cabin with his two dogs Shorty and Rebel, and hanging out with his friends. Many people loved his quick wit and funny sense of humor. He had a natural knack for fixing things. There was a Vigil/Rosary service on Sunday evening Jan. 31 in Sacred Heart Catholic Church led by Deacon Gary Endres. A funeral Mass was offered on Monday, Feb. 1 in Sacred Heart Church with Rev. Joseph Keating, pastor, and Fr. Kyle Walterscheid concelebrating. Assisting with Mass were music ministers Christi Klement, Diane Grewing, Linda Flusche, Doug Yosten, and Jim Endres. A cousin, Kayla Patterson gave the First Reading. Samantha Muller gave the Second Reading, and Prayers of the Faithful were offered by Kaitlyn Davis, Jody's cousin. Kim Felderhoff served as Eucharistic minister. Burial followed in Sacred Heart Cemetery. As a tribute to Jody “Go Rest High On That Mountain” by Vince Gill was played before the burial. Pallbearers were nephews Ethan Muller and Logan Muller, friends Glen Dangelmayr, John D. Bartush, Waylan Hess, and John Klement. Members of the Muenster Jaycees served as honorary pallbearers. He is survived by his parents Ross and Janet Felderhoff; sister and brother-in-law Deann and Ronnie Vaughan; grandmother Aileen Knabe; niece Samantha Muller; nephews Logan and Ethan Muller; uncles and aunts Scott and Sandy Felderhoff, Kenny and Kim Felderhoff, Carol Sicking, Gary and Pam Knabe, all of Muenster, and Lorie Grewing of Blue, Oklahoma; and numerous cousins. Preceding Jody in death were grandparents Al and Sis Felderhoff and Arnie Knabe; aunt Margie Ann Walterscheid; uncle Darrell Knabe; and cousin Amy Hilton. The family asks that memorial donations be made to the Muenster Jaycees.

On Tuesday, Jan. 26, 2021, Jody Ross Felderhoff, age 42, lost his battle with oral cancer and died in Presbyterian Hospital in Denton. Jody was born on July 5, 1978 at Muenster Memorial Hospital to Ross and Janet Felderhoff. He lived his... View Obituary & Service Information

The family of Jody Ross Felderhoff created this Life Tributes page to make it easy to share your memories.