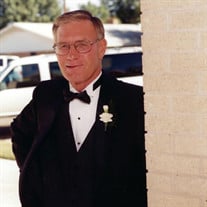 Mass of Christian Burial for John Henry 'Johnny' Anderle, age 76, of Muenster will be held at 10:00 AM on Thursday, November 5, 2020 at Sacred Heart Catholic Church. Burial to follow at a later date. Rosary and Vigil will be held at 7:00 PM on Wednesday, November 4, 2020 at Sacred Heart Catholic Church. Mr. Anderle passed away on Sunday, November 1, 2020. Johnny was born to Eugene and Ethel Anderle on April 20, 1944 in Archer City, Texas. He was the second youngest of eight siblings. He grew up and attended school in Windthorst, Texas where he graduated in 1963. Upon graduating high school he was employed at Berend Brothers as an egg plant manager and served in the National Guard for six years. During this time he met Annette Fuhrmann at a wedding in Windthorst. They were later married on June 11, 1966 in Saint Peter’s Catholic Church in Lindsay, Texas. They lived in Windthorst, Texas for a short time. In 1964 they moved to their permanent residence of Muenster when he was hired by Cooke County Electric. He retired from the Co-op after 43 years of employment. Johnny was truly admired by many. He was a true humble and faithful servant, always serving others and looking to help those that needed it the most. If you had the pleasure of meeting Johnny, even for a minute, you were truly blessed with his infectious smile. Johnny had a heart of gold. He developed life-long friendships with those he worked with. His smile and work ethic were contagious to all he met. Johnny was a man you could depend on. He was one to lead by example. His faith and family came first. He never feared hard work. He found joy and satisfaction in a job well done. Many of his hobbies included gardening, hunting, fishing, wood carving, playing 42, and spending time with his family and friends, enjoying time with grandchildren and watching their sporting events. He and Annette also loved to travel with family and friends. He will truly be missed by many. He is survived by his wife of 54 years, Annette. Son and daughter-in-law John and Amy Anderle and their children Karli McEwen and husband Nathaniel; Bailey, Annie, Marcus, and Garrison. Son and daughter-in-law Kevin and Brenda Anderle and their children Tyler, Trey and Trent Anderle, Wade Porter, Jessica Peake and husband Tommy. Daughter and son-in-law Denise and Craig Neu and their children Macie, Parker and Jordan. Daughter and son-in-law Kim and Scott Neeb and their children Kale and Channing. And son and daughter-in-law Corey and Megan Anderle and their children Dawson, Riley, and Gavin. Great grandchildren Traelei, Aurora, Kadience, Raelyn, Kolton. He was preceded in death by his parents Eugene and Ethel Anderle, brothers Leroy and Orville Anderle, sister-in-law Mabel Anderle, brother-in-laws Henry Schroeder and Vernon Badgett, nephews Doug Anderle and Duane Zotz and grandsons Karson Neeb and Adam Peake. And numerous nieces and nephews.

Mass of Christian Burial for John Henry 'Johnny' Anderle, age 76, of Muenster will be held at 10:00 AM on Thursday, November 5, 2020 at Sacred Heart Catholic Church. Burial to follow at a later date. Rosary and Vigil will be held at 7:00 PM... View Obituary & Service Information

The family of John Henry 'Johnny' Anderle created this Life Tributes page to make it easy to share your memories.

Send flowers to the Anderle family.