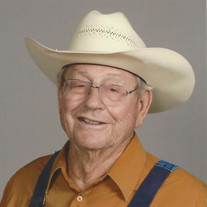 Mass for John “Johnny” Charles Fisher, age 85 of Muenster is set for 10:00 AM, Saturday, April 21, 2018 at Sacred Heart Catholic Church with Father Ken Robinson and Brother Ralph Gourley officiating. Rosary and vigil will be held at 7:30 PM, Friday, April 20, 2018 also at the church. Johnny was born March 11, 1933 to John A. and Margaret (Schmitt) Fisher. He attended Sacred Heart School from first through tenth grade and graduated in 1951 from Muenster ISD. He attended St. Edwards University in Austin and joined the Army in 1953. After his military service he attended the University of Houston. He remained in Houston and was involved in several different businesses. Johnny and Louise Barr were married December 26, 1960. Louise had 2 boys, Randy and Don. In 1964 they moved to the Meyerland area of Houston. Soon after, Johnny took over an Exxon service station and then added another location. In 1967, he took over the first Exxon Car Care Center in Houston and received national recognition for his success in building that business. In 1971, he purchased his grandfather, Joe Fisher’s 300 acre farm outside of Muenster and began making regular trips from Houston to Muenster in a small airplane on weekends. In 1975, he and his brother Butch purchased the meat market and grocery business from his father and uncle and he moved back to the Muenster area after being gone 24 years. He retired in 2005 after 30 years and became a full time farmer. After injuries received in a car wreck, he lost his wife of 51 years, Louise (Barr) Fisher in 2011. In July of 2012 he married his high school sweetheart, LaQueta Cain. She had 2 daughters, Kelley Prewett and Tracey Nichols. Johnny had to go on kidney dialysis in September 2016. He fought a good fight, but he went to meet Jesus on April 11, 2018. Johnny is survived by his wife, LaQueta Cain Fisher of Muenster; daughters: Kelley (Carty) Prewett of Quinlan, TX and Tracey Nichols of McKinney, TX; sons: Don Barr of Austin and Randy (Melissa) Barr of Round Rock, TX; twelve grandchildren; thirteen great-grandchildren; sisters: Ruthie (Max) Rumelhart, Jeanette Galloway of New Braunsfels and Rosemary (Mike) Larder of Nicholson, PA; brother, Butch (Eileen) Fisher of Muenster. He was preceded in death by his wife, Louise Barr Fisher, brother-in-law, Joe Galloway, brother, Clyde Fisher and sister-in-law, Polly Fisher. In lieu of flowers, the family requests donations be made to one of the following charities: Sacred Heart Church in Muenster, Candlelight Ranch in Marble Falls, TX (www.candlelightranch.org; PO Box 26367, Austin, TX 78755) or EWTN Global Catholic Network (www.ewtn.com)

The family of John Charles Fischer created this Life Tributes page to make it easy to share your memories.

Mass for John “Johnny” Charles Fisher, age 85 of Muenster is...

Send flowers to the Fischer family.