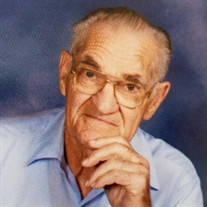 Mass of Christian Burial for Joseph Bohl, age 87 of Muenster is set for 10:00 AM, Friday, May 26, 2017 at Sacred Heart Catholic Church with Father Ken Robinson officiating. Burial will follow in Sacred Heart Cemetery. A vigil will be held at 7:00 PM, Thursday, May 25, 2017 at the funeral home. All services are under the direction of Scott Funeral Home in Muenster. Mr. Bohl died Sunday, May 21, 2017. In 1930, Joe Bohl entered life as Depression-Era baby being one of twelve siblings of a North Dakota farming family.  Life was hard growing up on the farm which had no electrical power until 1946, so eventually, Joe had to drop out of school in 8th grade to help work the family farm.       In addition to working on the family farm, Joe was musically gifted and could play many percussion, wind, and string instruments.  He played drums for the North Dakota Ramblers band on weekends throughout the region until joining the Army in 1951.  After leaving the army, he settled in Denver, Colorado in 1960 and worked in construction until he retired. After surviving lymphoma cancer in 2005, he relocated to Texas to live with his daughter and later, his son.  His hobbies included hunting, fishing, dancing, and teaching the Polka to anyone who wanted to learn! Joseph is survived by his daughters: Linda Bohl of Milton, FL and Susan and husband, Dell Bryant of North Richland Hills, TX; son, Greg Bohl of Muenster, TX; four grandchildren; sisters: Margaret Williamson of Pensacola, FL, Theresa Burnworth of Oklahoma City, OK, and Barbara Recktenwald of San Diego, CA; brothers: Peter Bohl, and Fran Bohl of Fort Benton, MT. He was preceded in death by his parents, Xavier and Magdalena (Axtmann) Bohl, sisters: Mary Boehm, Magdalena Schmidt, and Amelia Duey; brothers: Nick Bohl, Frank Bohl, Louis Bohl, and Andy Bohl. Pallbearers were: B.B. Bruns, Spencer Lowry, Del Bryant, Stan Buckmire, Adam Bohl, and Robert Volk.

Mass of Christian Burial for Joseph Bohl, age 87 of Muenster is set for 10:00 AM, Friday, May 26, 2017 at Sacred Heart Catholic Church with Father Ken Robinson officiating. Burial will follow in Sacred Heart Cemetery. A vigil will be held... View Obituary & Service Information

The family of Joseph Bohl created this Life Tributes page to make it easy to share your memories.

Mass of Christian Burial for Joseph Bohl, age 87 of Muenster...

Send flowers to the Bohl family.