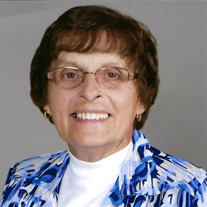 Mass of Christian Burial for Judith Ann (Lutkenhaus) Hess, age 78, of Muenster will be held at 9:30 AM on Friday, March 25, 2022 at Sacred Heart Catholic Church. Rosary and Vigil will be held at 6:00 PM on Thursday, March 24, 2022 at Scott Funeral Home in Muenster. Mrs. Hess passed away on Sunday, March 20, 2022. Judith Ann Lutkenhaus Hess, more commonly known as “Judy” and “Grammy”, was born on December 14, 1943, to William T. and Katherine Lucile Lutkenhaus. Judy had one sister, Janet Sue. Judy is survived by daughters and sons-in-law Connie and C.A. Samford, Carrie and John Demcher, and Heather and Jeff Arendt, and son Nathan Hess. Judy grew up in Muenster, attending both Sacred Heart and Muenster Public Schools. She graduated from Muenster High School in 1961. Shortly thereafter she went to work for the Texas Department of Highways and Public Transportation (TxDOT), where she worked for 35 years before retiring in September of 1997. Judy married Virgil John Hess on March 31, 1978, at Sacred Heart Catholic Church. They made their home at 517 N. Pecan Street in Muenster. They were blessed with four children, Connie, Carrie, Heather, and Nathan, as well as six grandchildren, Katie, Benjamin, John, Jayson, Anna, and Luke. Judy’s favorite childhood memories were made with her sister Janet. According to some recent stories told, Janet usually had fun making a mess and Judy had fun cleaning up Janet’s messes. One recent memory that Judy and Janet shared is of a Christmas surprise of receiving bicycles! When they began to ride, both could get started and ride but could not stop. So, Judy would run into the north side of the shop and Janet would run into the old garage door to stop. Other activities they enjoyed on the farm included playing in the treehouse and the large hay barn, hiking in the creeks (with a sleeve of saltine crackers and a quart canning jar of water so they wouldn’t starve), trying to catch crawdads in the creek by FM 1630, and counting how many cars went over the large culverts. One evening, while Judy and Janet were home alone, they heard an armadillo in the yard. They tried to chase it out of the yard without success. Judy got their Daddy’s .22 gun to shoot it but couldn’t figure out how to get the gun off safety. So, Janet got the axe and they eventually succeeded in killing the armadillo but in the process the armadillo bled on their white jeans. They put the jeans in water in the utility room sink to soak. When their mother and daddy came home, they were initially concerned that Judy and Janet had been hurt. Once they learned of Judy and Janet’s adventures, they were relieved yet a little aggravated at the initial fear that Judy and Janet were the ones injured. These are just a few of the many fond memories Judy and Janet shared with us through the years. Their close bond has been evident over the years, as they have either been together in the same house or across the street from one another for most of their lives. Special school memories for Judy included playing the bass drum in the band, teaching boys how to crochet on the long bus rides home from school, and dancing with her girlfriends, especially Tommie Sue, at school dances, because the boys were too shy. The most memorable bus ride occurred the day that she finally convinced “mother” to let her wear her new dress to school. She stood up to change seats on the bus about the time the bus driver accelerated, and she tumbled down the aisle and straight out of the back of the bus. She landed directly into a mud puddle in her dress. She was not injured but was quite terrified of what would happen once she made it home that day. During marriage when they had the chance, Judy and Virgil enjoyed traveling. They enjoyed trips to Las Vegas, Louisiana Downs, and to Missouri to visit their friends the Dyes. Activities Judy and Virgil both enjoyed with their children were trips to the Fort Worth Zoo and game nights playing Yahtzee, Uno, and Skipbo. After Virgil’s passing Judy proudly did her duty and served in his place as County Commissioner for Cooke County Precinct 4. Her knowledge from the highway department had her fit for the position and she was said to be one of the “best bosses” by the road crew…which would have probably made Virgil mad. Judy carried her enjoyment of travel with her throughout life. Memorable trips after her retirement included going to Arizona with Connie, trips to Pennsylvania and Boston with Carrie, visiting Germany with Heather, seeing the Grand Canyon and Yellowstone with Nathan, and visiting the Vatican with a Sacred Heart church group. Judy’s hobbies included baking and decorating birthday cakes for her children and grandchildren, sewing, doing counted cross-stich, crocheting, and her latest hobby of making quilts. She took great pride in finding unique patterns, picking material, and piecing a quilt for each of her children and grandchildren. Judy was proud of each of her grandchildren and always looked forward to attending as many of their extracurricular activities as possible. Judy will always be remembered for her meticulous mannerisms. We will cherish all our memories of her. While we are sad that she is no longer here with us, we are relieved that her suffering is now over.

Mass of Christian Burial for Judith Ann (Lutkenhaus) Hess, age 78, of Muenster will be held at 9:30 AM on Friday, March 25, 2022 at Sacred Heart Catholic Church. Rosary and Vigil will be held at 6:00 PM on Thursday, March 24, 2022 at Scott Funeral... View Obituary & Service Information

The family of Judith Ann (Lutkenhaus) Hess created this Life Tributes page to make it easy to share your memories.