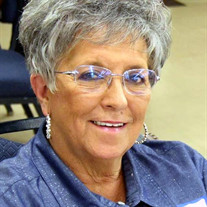 Memorial Service for Judy Carol (Meredith) McDaniel, age 73, of Muenster was held at 10:00 AM on Saturday, December 1, 2018 at First Baptist Church of Muenster. Visitation was from 5:00-7:00 PM on Thursday, November 29, 2018 at First Baptist Church of Muenster. Judy was born on January 4, 1945 to Quinton Robert Meredith and Wanda Lee Worley in Wichita Falls, Texas. Judy adored her mother, father and sister with all her heart. She attended Ryder High School and was proud to be a part of the first graduating class in 1963. While attending a Ryder football game on the day President Kennedy was assassinated, November 22, 1963, she met her future husband, Robert Wayne McDaniel. She and Robert were married on February 20, 1965 in Wichita Falls. Robert was the love of her life and she was his everything. In 1969, they moved to Muenster where Robert took a teaching job working half the day at Muenster and the other half at Callisburg. On November 17 of that year, the couple welcomed their first child, Judy Meredith McDaniel. The following year, Mr. McDaniel, know to his students as Mr. Mac, accepted a full time position at Muenster High School where he and Judy began their life-long passion for the Muenster Hornets and their love for Muenster as a community. On January 30, 1973, they welcomed their second child, Quinton Bradley McDaniel. Judy was a stay at home mom until Brad started school. Judy first started working in the cafeteria at Muenster ISD but quickly transitioned to her 38 year tenure at Muenster Butane/Walterscheid’s Appliance. She was still working there up until the day of her passing. During this time, she was a proud, founding member of the Muenster Bluebonnets. One of the Bluebonnets biggest fundraisers was the bike rally where Judy, along with friends and family, manned the first rest stop. Over the course of the years, she was blessed with four wonderful grandchildren. One from her daughter and three from her son. For the last sixteen years, she enjoyed watching her grandchildren doing whatever they were passionate about and she loved being their “Memmie”. When they were old enough, Judy loved hosting them for a week of “Camp Memmie”. Judy loved music. Growing up, her favorite song was “Runaround Sue” by Dion or anything by Elvis. And then George Strait came around. She was in love with hummingbirds, chickens, the Dallas Cowboys, Christmas (with an emphasis on Santas), jewelry with bling, and the occasional margarita with friends. Judy was always as beautiful outside, as she was inside. Everyone would compliment her on her hair, nails, and jewelry. Perfect strangers would even tell her how pretty she was. She was sweet, loving, kind, giving, and genuine to a fault One of her greatest joys was when her and Robert built their perfect home. It was always perfectly decorated for every holiday, and everyone felt warm and welcomed. For 36 years, she loved her girls’ trip to Branson, Missouri, where they shopped, watched shows, and enjoyed each other’s company. Because of her creative and talented nature, many people loved her quilling wedding announcements and holiday wooden decorations that she and Robert made together. Judy made the most beautiful and tasty cherry pies. She converted many countless skeptics, including her own son, into true believers. One of her proudest moments was teaching her oldest granddaughter, Allie, how to make her cherry pie. She was excited to be a part of the planning committee for the fifty-year call reunion for Ryder High. She and her school friends continued the effort to reunite their classmates each year since graduation. She was just as excited to continue the McDaniel family reunion each year, even after Robert had passed. As attendance declined, Judy offered to host the reunion at her and Robert’s home. Even though unplanned, she is having the ultimate reunion in heaven with the loved ones that went on before her. Mrs. McDaniel passed away on Tuesday, November 27, 2018. Judy is survived by daughter: Meredith & husband Joe Sherwood of Denton; son: Brad McDaniel of Muenster; sister; Marsha & husband Joe Richardson of Wichita Falls; grandchildren: Blake Sherwood of Denton, Allie, Christopher ‘Topher’ and Emily McDaniel all of Frisco; and nephew: Jody & wife Deidre Richardson of Wichita Falls. Judy is preceded in death by her husband: Robert Wayne McDaniel; parents: Quinton and Wanda; and infant brother: Quinton Meredith.

The family of Judy Carol (Meredith) McDaniel created this Life Tributes page to make it easy to share your memories.

Send flowers to the McDaniel family.