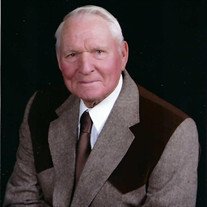 Julian Adolph Walterscheid of Muenster, Texas, died at the age of 89 on November 26, 2020, after a full and productive life. Born on June 22, 1931, Julian was the second of three sons born to Adolph and Marie Schoech Walterscheid. He married Carrie Ann Gehrig on September 28, 1954, at Sacred Heart Church in Muenster. They had eight children: Beverly, married to Michael Fuhrman; Joseph, who died shortly after birth; Darell, married to Sandra (Bezner); Stacie, married to Glenn Miller; Jesse, married to Francine (Hudspeth); Elaine, married to Dale Schilling; Wade, married to Rhonda (Jones); and Father Kyle, who was ordained a Catholic Priest on May 25, 2002. Julian and Carrie were blessed with fourteen grandchildren and twelve great-grandchildren. A graduate of Sacred Heart High School in 1949, Julian enlisted in the U.S. Air Force January 3, 1950, and, after basic training, was sent to Canute Field, Illinois, where he qualified as Heat-Treating-of-Metal Specialist and Aircraft Welder. The Korean War had begun, and he was shipped to Okinawa to work as an aircraft welder at Kadena Air Force Base. During this 2-year tour of duty came the opportunity to play football for the base team under Coach Bill Gustafson, an All American from West Point. Though 210 players reported for training camp, after two weeks the number was cut to 60 players, one of whom was Julian. He survived the cut as an offensive guard by reporting the school or college he had previously played for as “Tin University,” and it was thus recorded. After the team won the Far East Air Force Championship, Julian was selected to the Far East All-Stars to play in the Bamboo Bowl against the Army All-Stars on January 1, 1953. With this background, Julian became the lineman coach at Sacred Heart High in the fall of 1953, a role he served off and on over the next 45 years, helping the team to a state championship under John Nasche in 1994. Julian was a charter member of the board of directors of the Red River Farm Co-op and, in 1975, became one of four founding members of the Sacred Heart Trust Fund. Julian worked as a farmer, rancher, and welder. To meet the needs of the surrounding farmers, he designed and built hay barns, corrals, cattle trailers — anything he could build out of pipe and metal — and founded JAW Construction in 1980. He was a mentor to many and always built everything right the first time. Tilling acres of soil and seasonal planting brought him joy. Planting in the sandy soil of Clear Creek provided hundreds of pounds and bushels of vegetables, wheat, oats, soybeans, corn, barley, and hay. In the sandy bottom, he grafted pecan trees and maintained a small orchard. He was very proud of and worked continuously to improve the quality of his Brangus beef cattle. Over the years he and Carrie won multiple awards for Best of Sale for Open Heifers and Bred Heifers at stock shows in Ft. Worth. Julian is best remembered by his family and the community for being a leader, mentor, hard worker, dedicated husband and father with a great devotion to Sacred Heart Catholic School. In addition to his wife, children, and thirteen of his grandchildren, he is survived by his sister-in-law Della Walterscheid and his brother and sister-in-law Sylvan and Theresa Mae Walterscheid. He is preceded in death by his parents, brother Denis, son Joseph, and granddaughter Bailey Walterscheid. Arrangements are being handled by Scott Funeral Home in Muenster, Texas. A rosary vigil will be held at 5:30 Monday, November 30, and the Mass of Christian Burial at 10:00 Tuesday, December 1, both at Sacred Heart Catholic Church in Muenster. His grandsons will act as pallbearers: Derek Furhmann, Travis Fuhrmann, Aaron Walterscheid, Kevin Walterscheid, Austin Miller, Tyler Walterscheid, Jacob Walterscheid, and Jared Walterscheid. His granddaughters, Leslie Schilling, Dana Fuhrmann, Kristen Fort, Lisa Trubenbach, and Lauren Miller, will also be in attendance. Donations in Julian’s memory may be made to the Bailey Walterscheid Memorial Scholarship Fund or the SH Teachers Sustentation Fund, both at Sacred Heart Catholic School, P.O. Box 97, Muenster, Texas 76252, or the St. John Paul II University Parish Building Fund at 909 McCormick St., Denton, TX 76201.

Julian Adolph Walterscheid of Muenster, Texas, died at the age of 89 on November 26, 2020, after a full and productive life. Born on June 22, 1931, Julian was the second of three sons born to Adolph and Marie Schoech Walterscheid. He married... View Obituary & Service Information

The family of Julian Adolph Walterscheid created this Life Tributes page to make it easy to share your memories.

Julian Adolph Walterscheid of Muenster, Texas, died at the age...