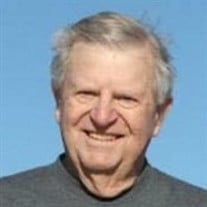 Kenneth B. Weatherford, 89, of Midland, Texas, passed away on July 6, 2017. Kenneth was born in rural Lubbock County on February 19, 1928 to Marvin and Velma Weatherford. He graduated from Breckenridge High School in 1946. Kenneth joined the Army the same year, serving in post-war Japan. He was discharged in 1947 and obtained the rank of Sergeant. He married Evelyn Mitchell on February 10, 1951 and their family grew to include 2 sons, Wayne and Randy. After working in the oil industry on a seismograph crew, Kenneth joined the Borden Milk Company in 1956. He began his employment in home delivery in Odessa, Texas and worked his way to General Manager, retiring in 1989. Over the years with Borden’s, Kenneth and Evelyn lived in Midland, Phoenix, Ft. Worth, New Orleans and Little Rock. An avid sports and outdoorsman, Kenneth enjoyed playing and watching football, baseball, golf and anything hunting and fishing. His sons and grandchildren made many special memories of their times together. Kenneth is preceded in death by his wife of 49 years Evelyn, his parents, sister Sherry Ann, brother Marvin, and great-grandson Trenton. Kenneth is survived by his sisters Gloria Stephenson of Midland, TX and Bernadyne Weatherford of Atlantic City, NJ, son Wayne (Mary) of Joplin, Mo, son Randy (Lenea) also of Midland and his grandchildren: Kenneth (Trisha) of Midland, James (Kayla) of Beaverton, OR, Matthew (Leah) of Big Spring, TX, and Callie (Mark Reams) of Midland. He also leaves a legacy of 8 great-grandchildren, brother and sisters-in-law as well as numerous nieces, nephews and friends to remember him. Visitation will be held at Scott Funeral Home, Saint Jo, Texas, on Friday, July 14, 2017, 6:00-8:00 PM. Graveside service will be held at Buffalo Springs Cemetery on Saturday, July 15, 2017, 10:00 AM with Scott Funeral Home handling funeral arrangements. Following the graveside service, the family will be gathering for lunch at Spicy Mexico Restaurant (206 E. Wise St, Bowie, TX 76230). In lieu of flowers, memorial donations may be made to The Rocky Mountain Elk Foundation, P. O. Box 8249, Missoula, MT 59807. The family wishes to extend their gratitude to all those who knew and cared for Kenneth at Manor Park, HGM Assisted Living and the Mabee Unit Rehab. The kindness extended to Kenneth will remain in our hearts.

Kenneth B. Weatherford, 89, of Midland, Texas, passed away on July 6, 2017. Kenneth was born in rural Lubbock County on February 19, 1928 to Marvin and Velma Weatherford. He graduated from Breckenridge High School in 1946. Kenneth joined... View Obituary & Service Information

The family of Kenneth B. Weatherford created this Life Tributes page to make it easy to share your memories.

Kenneth B. Weatherford, 89, of Midland, Texas, passed away on...

Send flowers to the Weatherford family.