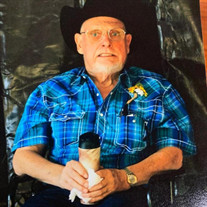 Larry Webb, 77, passed away on Friday, July 31,2020 at Christus Mother Frances Hospital inWinnsboro, TX. Due to the pandemic, a celebration of life will take place at a later date. Larry was born to Russell “Dean” Webb and Mary (Felix)Webb on June 19, 1943 in Britton, SD. Larry attended school in Britton where he graduated in 1961. Larry was a member of the United Methodist Church in Britton, SD. After graduation he continued to help on the family farm. He also served in the Army National Guard for 6 years. On September 5, 1964 he was united in marriage to Sharlene Bauer. Before going their separate ways, they had two daughters: Cheryl and Rhonda. In the 1970’s Larry became involved in a business adventure with his family. This was the beginning of his true calling, entrepreneurship, aka wheeling and dealing. They had invented a haystack mover, which eventually transformed its way into the cotton module mover. He made his way to Texas in the early ‘80’s where he continued being involved in the cotton industry in some way, shape, or form up until the day he passed away. Larry loved life. He worked hard and he also played hard. He loved to eat steak, tip back a few cocktails, dance and play pool. He also loved to be surrounded by friends. One of his favorite things to do was have a cookout on Sunday afternoon with his friends to show off his grilling skills, which he was quite good at. Larry was a man that if you met you would never forget, and his life is well worthy of a lengthy novel. He was a stubborn man, also. In hindsight, this is what probably helped us all to have 5 more years with him. He was also an active member of the Elk’s Lodge and dedicated much of his time and money to this organization. Larry is survived by his two daughters: Cheryl (John) Lopez of Winnsboro, TX, and Rhonda (Roger)Rauen, Gary, SD. His three granddaughters: Nicole Scott, Gainsville, TX, Brittany (Matt) Bullis, Sioux Falls, SD; Karli (Casey Crume) Clear Lake, SD. His 5 great-grandsons: Micah Sanders, Aidan Sanders, Ti’Rell Sanders, Jaxon Bullis, and Lincoln Bullis. His two brothers: Dale (Kathy) Webb of Nipawin, Saskatchewan, Canada, Mike (Ivalu) Webb of Watertown, SD, and Sharon (Steve) Ryan of Rapid City, SD. Larry also had another special friend that he considered his “son” and Larry was his “pops”: JC (Dalia) Lopez, Corpus Christi, TX. Preceding him in death were his parents Dean and Mary Webb, a brother, Jack Webb, and granddaughter, Amanda Scott.

Larry Webb, 77, passed away on Friday, July 31,2020 at Christus Mother Frances Hospital inWinnsboro, TX. Due to the pandemic, a celebration of life will take place at a later date. Larry was born to Russell &#8220;Dean&#8221; Webb and Mary (Felix)Webb... View Obituary & Service Information

The family of Larry Dean Webb created this Life Tributes page to make it easy to share your memories.

Send flowers to the Webb family.