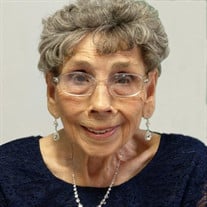 Funeral service for Laura Lee (Brown) Fanning, age 97, of Marble Falls will be held at 2:00 PM at Saint Jo Church of Christ on Sunday, September 22, 2019. Burial to follow at Perryman Cemetery in Forestburg. Visitation will be held from 2:00 to 4:00 PM on Saturday, September 21, 2019 at Scott Funeral Home in Saint Jo. Laura was born on March 16, 1922 in Ross, TX. When she was born her mother, Carolina Susan (Sue) (Hale) Brown, went blind for about six-weeks. They hadn’t named their baby girl yet and her father, John A. Brown, started calling her “Totsie”. She would go by this nickname the rest of her life. When her mother regained her sight, she realized that this baby needed a proper name and named her Laura Lee. She had one sister, Noase Elwee (Dollie), two brothers: Fred Burns and Jim D. Brown. She was raised on an oil lease located between Iowa Park and Burkburnett. When she was 17, her family moved to Arkansas. It was there she met and married her first husband, Garland Earwood. They had one daughter together, Jeri Sue (Earwood) Douglas on December 21, 1940. Laura, Jeri and her parents moved to Corpus Christi in January of 1941. In February of 1947 she married Henry Earl Fanning and he had two daughters from a previous marriage, Martha Mae and Elva Jenell. Together they had Dennis Earl, John Michael, Kevin Lee and Tami Melissa. In 1971 they moved to Muenster and she lived there for 45 years. She enjoyed attending church, cooking, sewing, quilting, crocheting, taking care of her family and get togethers with family and friends. When she couldn’t care for herself in her own home, she moved in with her daughter, Tami, and son-in-law, Bill in Nocona in 2016. They then moved to Marble Falls in July of this year and that’s where she lived out the rest of her days. She enjoyed telling jokes, Brer Rabbit stories to the kids and loved to laugh! She always said, “At my funeral you need to play “Cotton-Eyed Joe” and if I don’t get up and dance you will know that I am gone.” She passed away on Thursday, September 19, 2019 surrounded by loving family members. She was a beloved wife, mother, grandmother (Nanny), great grandmother and great-great grandmother! She raised 7 children, had 20 grandchildren, 23 great grandchildren and 28 great-great grandchildren. Laura is survived by daughters: Martha Mae Deckert of San Antonio; Jenell Blankenship of San Antonio, Jeri Sue & George Douglas of Sequin, WA, Tami & Bill Laws of Marble Falls; sons: Dennis and Carol Fanning of Houston, John Fanning of corpus Christi, and Kevin & Barbara Fanning of Muenster; 20 grandchildren; 28 great grandchildren; 23 great-great grandchildren; and numerous nieces, nephews, and cousins. She was preceded in death by her husband: Henry Earl Fanning, her parents: John A. and Carolina Susan (Carrie Sue) (Hale) Brown, her sister and brother-in-law: Noassie Elwee (Dollie) and Virgil Potts, her brothers and sisters-in-law: Fred and Mary Brown, Jim and Virginia Brown, a nephew: Doug Potts, a niece: Velma Woods, and two grandsons: Bobby Dale Blankenship, Sr. and Dan Dwayne Deckert.

Funeral service for Laura Lee (Brown) Fanning, age 97, of Marble Falls will be held at 2:00 PM at Saint Jo Church of Christ on Sunday, September 22, 2019. Burial to follow at Perryman Cemetery in Forestburg. Visitation will be held from 2:00... View Obituary & Service Information

The family of Laura Lee (Brown) Fanning created this Life Tributes page to make it easy to share your memories.

Customized sympathy cards. Mailed for you.