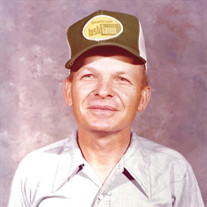 Lewis Watson McPherson, age, 85 of Saint Jo, passed at 10:30pm Monday, November 1, 2021. Visitation will be held at Scott Funeral Home in Saint Jo on Monday, November 8, 2021 from 6:00 to 8:00 PM with a graveside service on Tuesday, November 9, 2021 at 10:00 AM in Colleyville, Texas at Bluebonnet Hills Memorial Park. Lewis was born on February 26, 1936 to Tom Watson and Effie Fay McPherson in Roanoke, Texas. He was the oldest of six children. He lived in Roanoke until the family bought land and moved to Saint Jo in 1986. An avid horse trainer in his younger years, he raised and showed horses during this time. Many of his accomplishments included raising and training a horse for Lyndon B. Johnson. Two barrels held his prized trophies from reining competition. Always a farmer/rancher at heart, raising pigs, horses and 100’s of cattle were his hobbies. He was a short haul trucker driving for Shulman Air Freight and Churchill Truck Lines until he retired in 1990, He continued to run cattle, and drive his tractors until just a short time ago. He is survived by his four children: Tina McPherson of Alexandria, Minnesota, Angela and Chuck Harris of Saint Jo, Texas, Tommy and Jennifer McPherson of Gainesville, Texas and Melissa McPherson and Chad Tucker; Grandchildren: Tiffany McPherson, Blake McPherson, Hunter and Kyleigh Smith, Austin and Madison Neely, BrookLyn Lyons, Logan Grace Lyons, and Morgan and Grant McPherson; Great-grandchildren: Christian Kugler and Jackson Miller, Ava, Gary, Brynnleigh and Cooper, Sophie Ann Neely, and Maggie Jane Harmon. He is further survived by sister: Nancy Jo and husband Jerrell Estill of Southlake; brother: Paul and wife Nancy McPherson of Rhome; sisters-in-law: Martha McPherson of Bridgeport and Lavonda McPherson of Sunset; and a host of nieces, nephews and friends. Lewis was preceded in death by his parents: Tom and Fay McPherson; sister: Patsy Lee Hall; brothers: Walter Charlie McPherson and David Tom McPherson; and grandson: Garrett McPherson.

The family of Lewis Watson McPherson created this Life Tributes page to make it easy to share your memories.

Send flowers to the McPherson family.